The general public is hereby informed that Ba Alhagie Jaiteh sponsored Inter-ward football competition scheduled to start on Sunday, 25th March 2012 at Brufut Lower Basic School football ground as captioned in The Point Newspaper of Friday 3 March 2012 had been put off due to the sudden death of Ousman Jatta, alias ‘Jatta B’.

The late Jatta B was a renowned footballer of Young Stars Football Club of Brufut. He is well liked by the people and very friendly. He worked for the Gambia College as their accountant for many years.

May his Soul Rest in Perfect Peace-Amen!

In this regard, the opening of the tournament will now take place on Thursday 29th March 2012 at 4:30pm at the Brufut Lower Basic School football ground between Sateba A and Sanchaba A.

The Tournament is aimed to select best players of Brufut, promote unity and other social development projects in our community.

All distinguished invited guests, the people of Brufut and the media are kindly invited to join a colourful opening match on Thursday 29th March and we pay last respect to our fallen Hero ‘Jatta B’. See match fixtures for subsequent games. 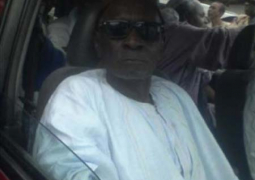