The average human being would like to have his cake and eat it. He or she does not often submit to instructions willingly. Human beings like to have it their own way. Adam and Eve whose DNA has been passed on to us, did likewise in the Garden of Eden. Rather than obey, we rationalise.

We are quick to try and wriggle out of ‘a bind’ by using baseless and groundless arguments that cannot hold water. We make vague assumptions that are not founded on biblical truths, precepts or principles – just because we do not want to comply.

It is time we stop second-guessing God. God speaks clearly without ambiguity. God’s Word is straightforward. If we do not understand what He means, we can ask Him to clarify. All God’s utterances should be taken seriously. The first instruction given to Adam was misconstrued and diluted that it landed humanity in trouble. “Do not eat of the tree for when you eat of it you will die.” was openly flouted when the serpent sowed seeds of doubt in the minds of the couple Adam and Eve.

As we reflect on our past - particularly our youthful days - we can identify with the number of times when out of ignorance of the word of God we were misled into thinking that we could have it our own way by asking for forgiveness each time we falter. We unashamedly fall back on God’s promise: “If we confess our sins, He is faithful and just to forgive us our sins and to cleanse us from all unrighteousness.” (1 John 1:9) We indulge in the same sin and repeatedly ask for forgiveness, counting on God’s mercy.

God told father Abraham to walk before Him and be perfect as He is perfect. “I am God Almighty, walk before me and be blameless.” (Genesis 17:1b) Each time we sin, we are breaking the bond that unites us with the Father. Sin separates us from the love of God. Under no circumstance can God tolerate sin. So we must seek to walk in righteousness.

Yes, we may fall in and out of sin; we may commit some silly mistakes sometimes. But we cannot live a life of sin and expect our Father to turn a blind eye. He expects each time we slip to come to our senses and the realisation of the truth, repent and quit sinning in order to be restored. Most of us have experienced that rude awakening in our walk with God.

The Bible says that God’s “commands are not burdensome.” (1 John 5:3) Whatever has been prescribed for us falls within our capabilities to carry out or respect. Our sacrifices do not compensate for our disobedience. The prophet speaking to King Saul on behalf of God conveyed; “Does the Lord delight in burnt offering and sacrifices as much as in obeying the voice of God? To obey is better than sacrifice ...” (1 Samuel 15:22)

We cannot continue twisting and thwarting God’s word to suit our personal inclinations and cravings with a rather lame excuse ‘Lord, I am not perfect.’ Adam blamed his act of disobedience on Eve, “The woman you put here with me ...” (Genesis 3:12) Passing the buck is an uncanny way to get out of our mess. Admission of guilt constitutes the first step to repentance.

The minor concessions that we make for the benefit of the devil are like cankerworms that eat into our psyche and cause sometimes irretrievable damage -- far more than we bargained for at the initial stage.  Such actions may not seem to impact our lives considerably at the time. However, with hindsight they cause much regrets. King Solomon refers to them as little foxes that can easily compromise the harvest once they get into our fields. We must be wary of such happenings.

When we talk about sexual immorality, most people hide behind clichés like: but Abraham had two wives. The answer to that flawed reaction is that we are not living in the Old Testament times. Polygamy had stripped the household of Jacob, Elkana, David and Abraham to name but a few, of their peace. Why would we want to pursue that path? No one likes to live in discord, quarrels and tension. Therefore the apostle admonished that a deacon must be a man of one wife. (1Timothy 3:2) If he has to concentrate on his ministry, he does not have a choice.

Sexual pervasion was prevalent in the Old Testament. We see Sarah who was barren inviting her husband to go to bed with her maidservant who conceived and bore Abraham a son. Because it was not God’s bidding Abraham suffered moral stress and had to relinquish Hagar for peace and sanity to prevail.  Jacob cheated, laid with his maidservant, yet God was merciful and patient with him.

Human beings have a strange way of construing things. Some believe that it is the one who gave birth to the Messiah’s mother that should be more venerated than the Son (Jesus) whom she bore. Spiritual things cannot be understood by human logic. No human being comes into this earth without using a human vessel. Our Lord’s birth could not be an exception or else it could have been considered magic not in keeping with the norm.  God needed a womb and found a willing receptacle in Mary. The call to save humanity and the world was an assignment given to Jesus not to his mother.          (...to be continued) 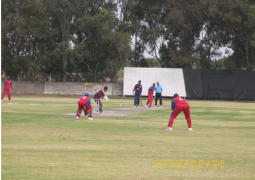 Gambia U-19 cricketers lose to Mozambique in Pepsi Div2 tourney