Heavy downpours of rain on Sunday flooded compounds at Nema Kunku and Jola Kunda, washing away household materials and destroying bags of rice. A number of stricken victims lamented their loss to this reporter.

Amie Kolleh Jarjue-Jatta, one of the victims, said that the rains came at a time when her husband was away in Cassamance and that she lost four bags of rice following the inundation of her home. She bemoaned that personal belongings like clothes were also washed away by the rain.

Momodou Jobe, a landlord, also said that his compound was flooded, resulting in the destruction of two bags of rice and a Nokia mobile phone. Another landlord, Basiru Keita, lamented the fact that he lost clothes and one bag of rice.

Nfally Gibba, the Alkalo of Jola Kunda, also claimed loss of two bags of rice, D300 when all four rooms in his home flooded.

According to reports, over 15 compounds near the football ground called Mboyo field in Bundung were also flooded with rainwater. 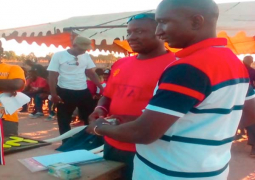 Gambia U-13 Cricket Team Warms Up For Regional Tournament