The British High Commission in The Gambia on Wednesday 21st April 2010 celebrated in grand style the 84th birthday of Her Majesty Queen Elizabeth II. The birthday celebration as usual gathered several diplomats and other well wishers at Admiralty House at Cape Point.

Speaking on the occasion, His Excellency Phil Sinkinson, British High Commissioner to The Gambia, expressed his delight in welcoming everyone to celebrate the birthday of Her Majesty.

He added that the UK-Gambia bilateral relationship remains strong, despite occasional disagreements. The Royal Gibraltar Regiment and Police Service continue to deploy here twice a year to undertake extensive training in peacekeeping support skills with the Gambia Armed Forces and the Gambia Police Service, he said.

High Commissioner Sinkinson revealed that the Regiment in concert with the Gambia Armed Forces Engineering Regiment, in conformity with their civic responsibilities, constructed two modern classroom blocks in the village of Madiana in close collaboration with GlossAid.

According to Mr. Sinkinson, although the Department For International Development (DfID) has winded down since December 2008, it remains the largest traditional bilateral donor in The Gambia.

"Since 2003, the UK government through DfID has committed over 10 million pounds to development projects and programmes in The Gambia," he said. Of this sum, he added, 2.5 million pounds has gone to support the financial governance project, which ended at the end of March this year.

"I think it fair to say that considerable progress has been achieved at the Ministry for Finance, the Directorate of Treasury, the National Audit Office and the Public Accounts Committee of the National Assembly under this programme," he stated.

The British High Commissioner further stated that DfID continues to fund the Excel project with Concern Universal to empower civil society organizations (CSOs) through building capacity and networks to enhance the proactive nature, professionalism and sustainability.

"In partnership with the VSO, the High Commission, through the Bilateral Programme Budget supported 16 projects in the areas of health, education and agriculture last year," he said.

He said the MRC has been undergoing a change process, culminating in the recent approval of a new 5-year plan for the unit.

"The MRC will continue to employ in excess of 750 staff. Some posts are being lost, but new projects are being created through new externally-funded research projects. The Farafenni Field Site was gifted to the University of The Gambia School of Medicine in February this year," he added.

He further announced that the MRC will boost the medical school's training capacity, noting that it contributes over 400 million dalasis to the Gambian economy through local salaries and through its local purchases of goods and services.

In the view of Mr. Sinkinson, it has been a busy yet fascinating year both in international terms and on the domestic bilateral front.

"Internationally we have suffered a global recession, the likes of which have not been seen for decades. And I think we all know that the knock-on effects of this will be felt for sometime to come," he said.

High Commissioner Sinkinson stated that everyone was currently feeling the effects of the Icelandic volcano, noting that it remains an open question as to how long it will continue.

"Consular staff at the High Commission are working hard to assist the tour operators and hoteliers in The Gambia to ease the problem locally. They are all doing an excellent job," he said.

Phil Sinkinson said he had highlighted a number of informal or non-governmental ventures in his speeches at previous Queen's Birthday parties, including: "The Don McMath Foundation a wonderful educational experience spearheaded by Anne McMath; the relationship between the county of Hampshire and the Gambian village of Soma – and we were privileged to have received a visit by the Lord Lieutenant of Hampshire in February this year. "Many thanks go to Lamin Kinteh and his team for making the visit such a success. The Marlboro Brandt Group and Gungur Link continue to thrive. The Bansang Hospital Appeal, brilliantly orchestrated by Anita Smith MBE and who, I am delighted to announce, is to be made a Member of the Order of the Republic of The Gambia on Saturday by President Jammeh."

He also highlighted the efforts of Mae Winterton from Schools for Gambia - who, he added, continues to carry out sterling work in the field of education.

"I would also mention the Karmic Angels, whom I had the pleasure of meeting for the first time earlier this year. There are many, many more," he said.

He further stated that he cannot only repeat what he often said, that not only are those behind these ventures pretty rare and unique people, but also that the bond of friendship between our two nations is pretty unique too.

"It is an historic bond, and is not one that is easily broken. It is a bond between people and is maintained through good and bad times. And will, I know, continue to do so," he said.

He further pointed out that over the years, the International Health Partners, a British NGO, has been very active establishing "The Gambia Health Alliance" to help the government of The Gambia access the appropriate skills, expertise and medical resources from the international public, private and voluntary sectors.

"We look forward to continuing our efforts in the coming year to strengthen even further the friendship and cooperation that exists between our two countries," he declared.

Honourable Ousman Jammeh, Minister for Foreign Affairs, International Cooperation and Gambians Abroad, in his speech conveyed best wishes of good health and long life on behalf of President Yahya Jammeh to Her Majesty.

He said the relationship between Britain and The Gambia has spanned a long time, quoting High Commissioner Sinkinson as saying "The bond that binds us together is one that is not easily broken."

This bond, he added, is and must continuously be maintained through good and bad times, and will continue to keep us and our future generations together.

"Our meeting today gives us an opportunity to reaffirm the commitment of the government of The Gambia to work with Her Majesty's government to further strengthen the ties of friendship and cooperation in all fields of endeavor for the mutual benefit of our citizens," Foreign Minister Jammeh stated.

He commended and recognized with gratitude the ongoing technical assistance support from the United Kingdom, particularly in the areas of capacity building both in the public and private sector.

"I am aware of the support rendered by the British government through Defence, the Interior (Police force), the Judiciary, Health, Education and Agricultural sectors. We thank Her Majesty’s government for that invaluable support.

"I want to single out the training provided by the Royal Gibraltar Regiment, on a continuous basis, which has equipped our police officers and military personnel deployed for peacekeeping operations in troubled regions under the aegis of the UN and AU," he said.

He called on the British High Commissioner to impress upon his government to do more to assist The Gambia in her socio- economic development endeavours.

"We hope that our cooperation will grow and gain strength through mutually agreed programmes," he said, adding that "as a government, we shall continue to support the United Kingdom in the international arena in matters of common understanding and agreement." 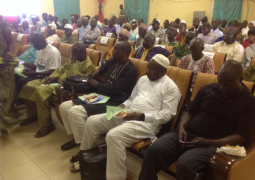