Abubacarr Boyo Touray, director of the Jolly Riders Foundation, a UK-Gambia philanthropist organisation in The Gambia, has said "quality education is essential for poverty alleviation".

Mr Touray was speaking at his organisation's handing-over ceremony of bicycles to schools, held recently at the Gunjur coastal village in Kombo South, Western Region.

"The government has made a lot of efforts to alleviate poverty in The Gambia but still there is poverty. With quality education in the country, poverty will soon be history in The Gambia because quality education is an essential tool for poverty alleviation," he said. This, he added, was the reason his organisation decided to venture into education by providing easy access to schools to assist schoolchildren who will, in the future, take up the leadership mantle of the country and in general.

According to him, from 2006 to date his foundation has supplied over 7150 bicycles to Gambian schools for students to have easy access to their schools and get educated thus contributing in eradicating poverty and bringing about development in the country.

Touray said the worth of the consignment his foundation had donated was D9 million but they had decided to donate it to schools in The Gambia to complement the government's effort in providing quality and affordable education to the nation.

He thanked the Government of The Gambia through the Ministry of Basic and Secondary Education for giving them the support needed to operate in the country.

He called on schools to apply for the Jolly Riders partnership so they would know which schools need their service and support.

Lamin Haja Bojang, Deputy Chairman of the Brikama Area Council who represented the Governor of Western Region, said he was grateful to the Jolly Riders for their support to Gambian schools.

"Government can build schools in every community but not in every household, so providing easy access to those schools is a step in the right direction," he said. "This is the best investment ever that anybody can do in their generation to alleviate poverty."

Mr Bojang stated that preparing young people, who are the future leaders, to be able to face challenges is a noble course.

Ansumana Demba, who represented the Permanent Secretary at the Ministry of Basic and Secondary Education, called on schools to "give the bicycles to deserving students and not to base it on any sentiment".

Mr Demba also urged the schools to upkeep the bicycles so they could serve for a longer period.

He assured the Jolly Riders of government's support at all times in their quest to boost the country's education sector.

The chairman of the Jolly Riders Foundation in The Gambia, Barry Wright, called on students to "show extra care while using the bicycles on the busy roads".

Other speakers on the occasion included Mr Sarjo Jobe, Principal of Sifoe Senior Secondary School, and Mr Juwara, a representative of the Regional Director of Region 5. 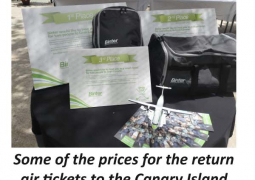 New indictment against three Fisheries officials not yet before the court