The unprecedented and unusual heavy rains in The Gambia this year were predicted months ago before the rains started. Both national and international weather institutions warned of extreme weather conditions that could increase the "perpetual flood risk".

Concern Universal (CU), with support from Oxfam American, disbursed D183,875.00 to nine of their local partner organisations in Western Region, and North Bank Region in 2010, CU Country Director for The Gambia and Senegal Patricia Wall revealed during an exclusive interview with The Point at her Fajara Office yesterday.

According to Patricia Wall, CU's actions are inspired by its improved efforts at weather forecast and proactive culture. "As a proactive development and humanitarian agency, CU activated its Contingency Plan (CP) in which the first action is to activate the Humanitarian Country Team (HCT) as well as the assessment teams in order to orientate them to start gathering data from affected areas," Director Wall said.

She stated that as part of its preparedness plans, CU and its international partner, Oxfam , started a project called "Enhancing Capacities in Disaster Preparedness".

She said the project, which is running for one year, secured funding of US $72,000 from Oxfam America.The CU director also revealed that the implementing partners are local partner organisations (including KMC, BCC and Regional DMCs) across the six regions of the country, she said, adding that CU's response is often based on the outcome of the assessment conducted by its partners across the country.

"This is then followed by the production of a situation report (sitreps) that is shared with local and international partners," she said. She asserted that each partner organisation is being asked to liaise with the National Disaster Management Agency for coordination and support in the assessment processes.

She further revealed that CU DRR Project Manager Ebou Faye is fully engaged with KMC DMC and is providing technical and logistical support, including a vehicle, for the assessment and relief efforts.

Director Wall also revealed that CU, in consultation with its donors for further response in the medium and long term, recently conducted a site visit to four flood-affected communities in the and two communities in Western Region. 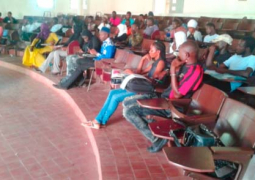