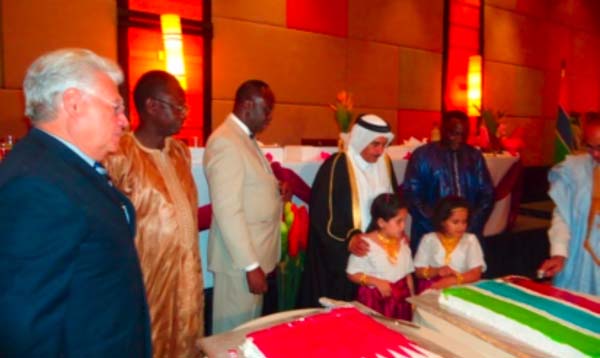 The Embassy of the State of Qatar in Banjul Friday joined the people of Qatar to commemorate the National Day of Qatar, which is on 18 December every year.

Qatar National Day is an opportunity to recognise and celebrate the tremendous efforts made by Qataris’ ancestors, who endured severe hardships and paid a dear price for the unity of their nation.

This national occasion ensures their identity and history, which embodies the ideals and visionary aspirations that the country was founded on.

“We will not be grateful without paying homage to the great men and women who endured severe hardships and paid a dear price for the unity of our nation, and participated in building what Qatar is today,” said Mohamed Nasser AL-Kaabi, the Qatari Ambassador.

In delivering a statement on the observance of this day, held at the Sheraton Hotel conference hall, Ambassador Nasser Al-Kaabi said: “We are celebrating today with our wise leadership a memorable day in our hearts. In commemoration of the founder of our young nation, Sheikh Jasim bin Mohamed bin Thani.”

December 18, 1878 was the day their national unity was achieved, and subsequently Qatar became a distinct and respected nation, he added

“This memorable day of patriotism, joy and pride are vividly seen on every Qatari, men, women and children, on the tangible achievements that the country has registered, thanks to its able government,” Qatar’s ambassador went on.

The state has attained great achievements that are unprecedented by any country, which covered all sectors and in a short period, he continued.

In the field of economy, for instance, the State of Qatar has restructured its industry by the establishment of petroleum production and natural gas and its derivatives, and has worked on the development of these areas.

Year 2014 witnessed the official inauguration of Hamad International Airport, which stands as one of the largest airports in the world and accommodates about 50 million passengers per year.

On Qatar’s diplomacy, the state is committed to the rights and sovereignty of other nations and with due respect for the internal affairs of other countries, taking into account that Islam is the source of legislation for the state of Qatar and, as a result, the state is governed by three powers namely, legislative, executive and judiciary.

Its worth mentioning in this cherished day, the progress that has been recently made on bilateral relations between the two friendly countries, the Qatari envoy said.

“In the third quarter of 2014, President Jammeh made a successful official trip accompanied by a high-powered delegation consisting cabinet ministers, senior government officials and investors to the state of Qatar.”

This trip was described as the most positive trip to Qatar since the inception of diplomatic ties between Doha and Banjul.

The two leaders witnessed the signing of some important agreements namely, an agreement on avoidance of double taxation and prevention of fiscal evasion on income, on air services between The Gambia and the State of Qatar, as they look forward to broader bilateral trade, economy and culture between the two nations in the near future, he added.

The Gambia’s Minister of Foreign Affairs, Balla Gaba Jahumba, congratulated the ambassador of Qatar on behalf of the Gambia government and people, “on this very important day in the history of the national day of Qatar.”

Minister Jahumpa further stated that there is a very strong relationship between the State of Qatar and The Gambia, and this was recently demonstrated by the state visit from the President of The Gambia to the State of Qatar on 18 and 19November, which resulted the signing of various bilateral agreements that would benefit the two countries.

The agreements were for the avoidance of double taxation between the two countries, and a bilateral service agreement that would facilitate the movement of people and goods.