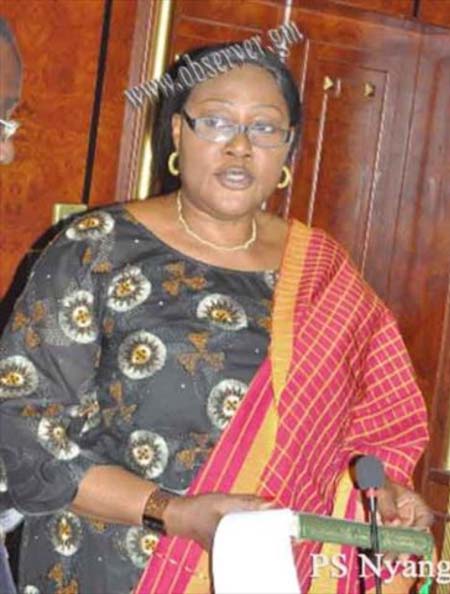 The permanent secretary at the Ministry of Youth and Sports, Nancy Nyang, has tasked the new board of directors of the National Youth Service Scheme (NYSS) to surmount the challenges that lie ahead of them and work to achieve much success for the institution.

Permanent secretary Nyang was speaking recently during the inauguration of the 9th new board of directors of the NYSS at the conference hall of the Independence Stadium in Bakau.

PS Nyang expressed his gratitude to the new board of directors for the confidence that they would work productively to provide skills training to the teeming young people of the country.

According to the youths and Sports PS, the elders of the nation have and would always sacrifice to see through that the desire of the youths in the areas of employment, education among others are tackled at all cost.

She said the launching of the scheme in January 1996, and established by an act of parliament in 1996, was to provide a platform for Gambian youths to acquire skills for employment, or self-employment opportunity for all Gambians in general.

She said the youths constitute the major component of the country’s human capital and if they are effectively utilised through capacity building then they would be dynamic drivers of the poverty reduction and sustainable human development.

However, she added, by extending national economic growth and the challenges facing the country was responded to the employment needs of the young people and meeting their aspiration for entry into productive sector of the economy.

The executive director of NYSS, Emmanuel D. Mendy, said the institution was established to respond to the needs of most young people who finish school with good results but face difficulties in getting job.

This, he asserted, was what inspired the President to come up with this initiative with the principal objective of helping the teeming youthful population in terms of self-empowerment, with the desire to ensure that youths are trained to be employable, as well as to pursue self-reliant ventures, among a host of other things.

He assured the ministry and the government in general of their dedication and commitment in steering the affairs of the institution and would be straightened at all times without delay.

He pointed out that initially the scheme started with an intake of 100 youths, and by the end of the 2013, the total number rose to 1678 youths in various fields of skills.

He added that the impact assessment study of 2001 had revealed encouraging result which shows that there is still high demand from the youth who want to join the scheme, even though there were misconceptions regarding the viability of the success of the program from skeptics.

Suteh M. Jawo, deputy executive director of NYSS, speaks about the history of the NYSS that was found in 1997 under the constitution of 1997 which clearly states out the scheme under section 1097 of the constitution which calls for the creation of NYSS, and the act of NYSS was formulated in 1999, to cater for the understanding of NYSS to ordinary Gambians regarding the function of the scheme.

He said the program strategy had been supporting youths in acquiring skills of their choice for employment and self-employment opportunity.

The report was prepared by Malamin L.M. Conteh