The prosecution in the criminal trial against former senior officers of the National Drug Enforcement Agency (NDEA) before Justice Amadi at the high court in yesterday recalled Jawo Keita, the prosecution’s fourth witness.

This followed an application by the deputy Director of Public Prosecutions, S.H. Barkun, under section 123 of the criminal procedure code, for the prosecution witness to be recalled to give fresh evidence.

Justice Amadi granted the application, with the defence raising any objection.

In fresh testimony, Jawo Keita, a police officer and a resident of Madiyana village, told the superior court that he knew the fifth accused person, Seedy Bojang, ex-NDEA accountant, adding that he could recall what happened on the 3rd and 4th of March 2010.

He said on this particular dates, he obtained the voluntary statement from the 5th accused person in the presence of an independent witness, whom he introduced to the 5th accused.

The police officer added he read the charges to the accused, which he denied, and that the independent witness subsequently and the accused appended their signatures on the voluntary statement.

The statement was tendered and admitted as an exhibit, following no objection by the defence counsel representing the accused persons.

The charges include conspiracy to commit a felony, stealing by person in public service, aiding and abetting, unlawfully possession of fire arms, unlawfully possession of live ammunitions, concealment and destroying of evidence, official corruption, abuse of office and committing economic crimes, obtaining money by false pretence, making documents without authority and forgery. 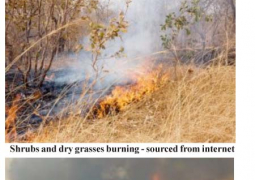