The Gambia on Monday celebrated the nineteenth anniversary of the 22nd July Revolution with a televised address to the nation by President Yahya Jammeh, in which he called on all true believers to be ready to lay down their lives to defend Islam.

July 22nd, as the day has come to be called, was that fateful day in 1994 when some military officers led by the then Lieutenant Yahya A.J.J. Jammeh toppled the Progressive People’s Party (PPP) government of Sir Dawda Kairaba Jawara in a bloodless military coup.

Held under the theme: “Let’s live and behave according to our religion”, this 22nd July anniversary celebration was seen by many as a moment of reflection on the achievements and shortcomings of the APRC government under the leadership of President Jammeh.

In his address, Jammeh slammed ‘‘satanic and decadent powers that promote such ungodly and satanic behavior in the name of freedom and human rights’’, stressing that ‘‘they would fail just like the crusaders failed to stop Islam.’’

‘‘The crusaders failed because true Muslims stood up to them. These homosexuals promoting powers would fail miserably because all true believers, Muslims and Christians, are standing up to them,’’ he added.

Dilating on the country’s achievements since the advent of the 22nd July Revolution, President Jammeh noted that the revolution has translated the attainment of the country’s independence into positive development.

He assured all of the government’s continued strong commitment and dedication to building an ultra-modern nation through the pursuit of economic and fiscal policies, provision of quality and relevant education, massive investment and expansion in the health sector.

In agriculture, Jammeh reiterated his call that “we grow what we eat and eat what grow”, adding that such would enhance our ability to attain the vision of self-sufficiency in food production in three years, and go into the export domain in 2017.

Noting that religion prescribes hard work and living by what we sweat for, the Gambian leader said this is particularly relevant in relation to agriculture, where as Gambians, “we should endeavour to grow what we eat and eat what we grow.’’

He stated that in spite of all the scepticism and cynicism expressed in the past, a great deal of remarkable successes has been registered thanks to the Almighty Allah.

‘‘Nineteen solid years of uninterrupted rapid socio-economic development, in a region saddled with economic uncertainty and senseless conflicts, provides a huge platform for us to declare that we as Allah worshipping Gambians are able to achieve this only by the will and blessings of the Almighty Allah,’’ he added.

According to him, the health sector will continue to be a priority for his government, and this is evident from the massive investment in the sector that has spanned the length and breadth of the country.

‘‘The result of such investment includes the expansion of public health facilities, extensive training of the much-needed health human resource base, the provision of adequate supply of essential drugs and cost-effective preventive public health interventions,’’ Jammeh said, adding that although health care delivery is within reach of all Gambians irrespective of location, specialist care is still limited.

‘‘In this direction, a proposal for modern diagnostic and specialist equipment has been developed for the Edward Francis Small Teaching Hospital, as well as other major hospitals. Insha Allah, we will implement all these projects very soon to usher in world class, medical care for all and sundry,’’ he stated.

Gambia's mbalax youngsters at the limelight 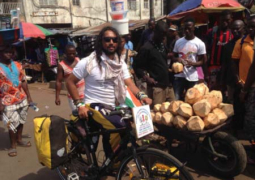