It is with great joy that we hear news from the White House that US President Barack Obama will this week make another trip to Africa, this time around, visiting South Africa, Tanzania and our neighbour, Senegal.

Considered as the most powerful man in the world, President Obama, by his visit to the continent, is expected not only to strengthen the already good ties between his country and the African Continent but will also serve as a moral booster and an assurance that the  Afro-American president holds in high regard the continent of his African ancestors.

Mr Obama is expected to meet lawmakers as well as business and civil society leaders and youth on his trip.

The 26 June - 3 July visit will be Mr Obama’s second to sub-Saharan Africa as president after having spent less than a day in Ghana in 2009.

According to the White House, President Obama will ‘reinforce the importance that the United States places on our deep and growing ties with countries in sub-Saharan Africa, including through expanding economic growth, investment, and trade; strengthening democratic institutions; and investing in the next generation of African leaders.’

The trip will underscore the president’s commitment to broadening and deepening cooperation between the United States and the people of sub-Saharan Africa to advance regional and global peace and prosperity, the White House said in a statement.

Why Senegal, South Africa and Tanzania are declared one of the most trusted partners in Africa is not expressly stated by the American president, but it should be clear to all that to be a trusted partner or friend to the U.S., one has to be a genuine bastion of democracy, human rights, the rule of law, liberty of the individual, and good governance.

For our neighbour, it must be also that the recent free and fair elections in Senegal and the peaceful and truly democratic environment in which they were conducted, must have hit a strong chord on the American presidency as it did on all peace-loving and democratic countries around the world.

Analysts say such trips are common for US presidents after they are relieved of the pressure of domestic campaigning. 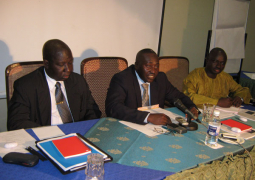