Yankuba Drammeh, according to many tennis followers, could be counted as one of the most outstanding tennis players.

Born in Bakau Newtown, Yankuba started his tennis career when he was a lad. Due to his seriousness and commitment to the game, he was given the opportunity to prove himself during the Gambia Open Tennis Championship. But, he was unfortunate after failing to make it to the second round due to his inexperience at the time.

He made his first international debut for the Gambia in the U-13 International Tennis Federation Championship which was hosted by the Federal Republic of Nigeria when he was just 13-yrs-old, but he was beaten in the quarter final.

Despite failing to win the tournament, the ambitious tennis player was recommended by the International Tennis Federation (IIF) representative who was so much amazed by the magnificent performance of the young prodigy, despite the fact that he was not mature enough.

Yankuba Drammeh's most outstanding achievement in tennis came when he won his first-ever gold medal during an open championship in Ivory Coast, after finishing seven (7th) among a total of 32 participants, which he described as a dream come true.

Yanks as she is fondly called is training very hard and looking forward to represent his country in the near future, both in international and national championships, thus expressing his desire to become an international player in the very near future.

He described Bobby Murray of Britain who has been named as the world's fourth (4th) most outstanding tennis player as his hero.

Yanks is also regarded as one of the youngest successful tennis players locally. 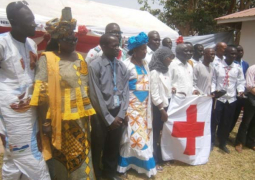