Goals from Magaddan duo Famara Jobe and Dembo Jatta gave their side a famous win over Junior Arms whose seven match unbeaten run was put to a halt in the Sanchaba Youth and Sports Football Tournament.

As the tourney reaches its seventh week there have been some fascinating and mouth watering games at the Steve Biko Football Field at Cape Point. The Fajara Barracks boys as they are fondly called, were punished for their failure to capitalise on their many created chances only to allow striker Famara Jobe to put his team in front after he smashed home the opener for Magaddan with a low shot that went past Junior Arms goal keeper Alagie Lowe.

Following a horrific mistake by goalkeeper Lowe, Magaddan's Dembo Jatta exploited the chance to extend his team's lead and daunted the winning spirit of the Barrack boys.

Landing Sawaneh of Junior Arms reduced the scores to 2-1 in the 70th minute from the penalty spot and the goal only proved to be a consolation after the game ended 2-1. Magaddan now rank at middle of the table with seven points.

Speaking to Pointsports shortly after the game the coaches of Junior Arms both stated that the defeat was due to some mistakes from their goalkeeper that resulted to the defeat and the absence of their key striker Lamin Joko. 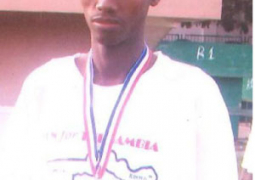