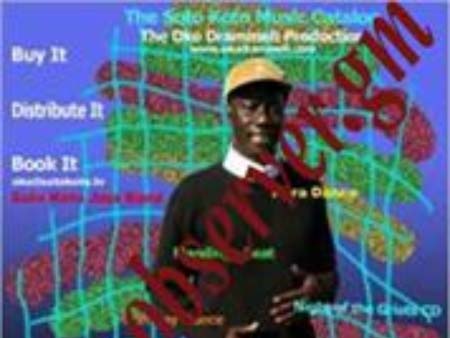 Oko Drammeh is one of the leading promoters of African music festivals in the world and the Soto Koto music in Hollywood, USA.

His festival in Amsterdam, launched in 1983, has grown into a major event that brings together more than ten thousand people annually.

Drammeh organized the first African Music Festival in the United States, holding the fete at the John Anson Ford Theater in Hollywood in September 1997.

Born in The Gambia and based in Holland, Drammeh was a great extent responsible for the increased popularity of Africa’s music worldwide.

Although there were few African musicians known outside of Africa when he began the festival in Amsterdam, Drammeh has continued to widen his scope.

In an interview with the L.A. Times, he said, “There’s a wide range of cultures in Africa. Music from the north is mostly stringed instruments and horns. From the Savannah, it’s mostly drums because they have huge trees. I decided to base my programme on generations - past, present and future - ranging from the veteran Hugh Masekela (South Africa), Osibisa (Ghana) to Samba Ngo Isa young, a Congolese guitar player. “With this programme, you have to mix it like a salad,” says Oko.

Oko Drammeh initiated the festival first in Delft, Holland, in 1983.As chairman of the African Arts Foundation, he has dedicated his life to the presentation, documentation and preservation of the African music and culture.

“Best known as Africa Day, the faithfuls and the fans come to Delft and spend glorious days in the beautiful coffee shops of Holland and the teahouses to enjoy magnificent nights of music, food and drinks. During its twenty-year life span, the festival has been very successful and has become one of the main tourist attractions in Delft and a valuable cultural manifestation for the Dutch government. The African Music Festival is the world’s largest annual, international African music event,” Oko said.

Oko grew up as a Disc Jockey for radio stations, night clubs and social events, listening to western pop and rock music on the radio, whilst being mainly influenced by African traditional music.

As organiser of the renowned African Music Festival, this Gambian born producer, now residing in Europe, has been a major force in presenting a great variety of African singers, composers and instrumentalists. He is also the creative force behind the Soto Koto Band.

The Festival was a taste of home for Africans living in Europe. The event quickly became popular with the Dutch people and soon became a major tourist attraction every summer, being graced by fans from England, France, Germany and the United States.

Oko is a producer, ethnomusicologist, as well as founder and chairman of the African Music Festival, one of the oldest and largest international African events in Europe.

In addition to producing several CDs in the Soto Koto catalogue for Higher Octave Music, which are now distributed by Virgin music, Drammeh also has produced documentaries on African music and culture for BBC, written articles for Downbeat magazine and has organised a host of festivals, concerts, symposiums and other cultural exhibitions.

He was also instrumental in introducing the music of, among others, Angelique Kidjo (Benin), Randy Weston (USA) Manu Dibango (Cameroon) and Osibisa (Ghana) to the European audience.

The cultural diversity between the artists has been immense, in such a way that visitors of the Festival can really sample the musical history of the African continent.

In addition to the Netherlands, the Festival has also been held in Africa and the United States. Drammeh also has produced events in France, Germany, England and Scandinavia. He has been one of the most consistent forces in the promotion of African music and culture.

Drammeh brought the Night of the Griots on a US tour that exposed the culture, music and instruments of the Manding people to American audiences in the first step of a cultural exchange between The Gambia’s capital city of Banjul and Austin, TX.

The events, which took place in several U.S. cities, were recorded for an upcoming DVD.

The success of Oko Drammeh has allowed for the African Music Festival Event to be hosted in France, England, Germany, Scandinavia, Belgium, China, USA, the Caribbean.

In 2010, the African Music Festival opened partnership offices in China and Japan to share the great diversity of African music and culture with Asian audiences.

A vision of Gambian-born and United States-based world music deejay and festival promoter Oko Drammeh, the Soto Koto Band combined the rhythms of Africa, the musical sensibility of modern European dance music, and the intensity of big band jazz.

The musicmagazine.com described a performance by the Soto Koto Band as “a tinkling instrument plays the lead on a track of African drums and leads on to African voices and trumpets in the big band jazz style”, while www. taobooks.com claimed that the band’s” spectacular percussion and exotic rhythms generate an irresistible urge to dance.