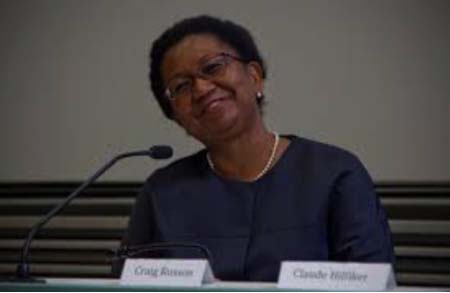 Dr Sukai Prom-Jackson, a national of The Gambia, and Inspector of the Joint Inspection Unit of the United Nations System (JIU), is a well-recognized global expert on evaluation, education, and institutional development.

She has over 25 years of experience and leadership roles working at the international, national and private sector in diverse areas including policy research, policy formulation, strategic planning and programme development and management, and development evaluation. Her work experiences have covered all regions of the world and over 80 countries.

Dr Sukai Prom-Jackson was nominated by the Government of the Gambia and elected by the United Nations General Assembly as an Inspector and has worked since 2013 with the JIU.

At the JIU, she has focused on complex system-wide evaluations for both organizational and development effectiveness. She gives a clear focus on development results in countries and has taken a lead role in the General Assembly pilot initiative on the system wide evaluation of the relevance of the United Nations system and the effectiveness and added value of its actions in a changing global context.

Based on her work, she has been invited to make numerous presentations to UN System Organizations, Member States of the UN System, Universities, and professional networks.

Prior to the JIU, she played a most significant role in the development of the Independent Evaluation Office of the United Nations Development Programme (UNDP). Between 2005 and 2012, she took a lead role in the development of a UNDP policy for evaluation and its institutionalization, in the pilot of country-led evaluations, in restructuring and enhancing the quality of the evaluation function, improving the methodology of complex thematic and impact evaluations, and in enhancing UN staff capacities for an evaluation culture and critical inquiry.

She represented UNDP and the United Nations Evaluation Group in various bi-lateral and multilateral conferences and meetings on advancing development evaluation and managing for development results.

Between 1989 and 2005, Dr Prom-Jackson worked with the World Bank in policy research, policy based lending, and investment operations in education including higher education. She also took a lead role in institutional development and professional excellence of World Bank staff and managers, on the development of global partnerships programmes, and on the evaluation of major initiatives such as the Fast Track Initiative - Education for All of the Millennium Development Goals.

1979-1986: She worked for over 5 years with USA government, and private institutions in the USA focused on basic   research and evaluation. This work involved major universities and research institutions including Harvard, Yale,  UCLA, Howard,  and Regional Research Centers. Her own research at that time focused on minorities and cognitive science. She was a lecturer and graduate thesis adviser at Howard University.

1969-2011: She has worked intermittently on education for over 5 years with the Government of The Gambia and national institutions including the Peace Corps. She continues to funds scholarships for secondary education in the Gambia and supports several Gambian-led initiatives in the diaspora.  Her current private initiatives include the development of the Junior Professional Pipeline, the Baby Jeay School of Fashion and Sewing, and the Center for Knowledge Management, Research and Evaluation for Learning and Action.

Dr Prom-Jackson is a graduate of Saint Joseph’s and the Gambia High School Sixth Form, and of Howard University and Middlebury College in the USA. She has been the recipient of several awards. She has an extensive number of technical reports and publications, has served in several advisory panels and led several taskforces.

She was recognized and invited to the Bellagio Thought Leaders Forum on Evaluation in Africa in 2012.  She is currently a member of the Advisory Board of the Center for Learning on Evaluation for Anglophone Africa.