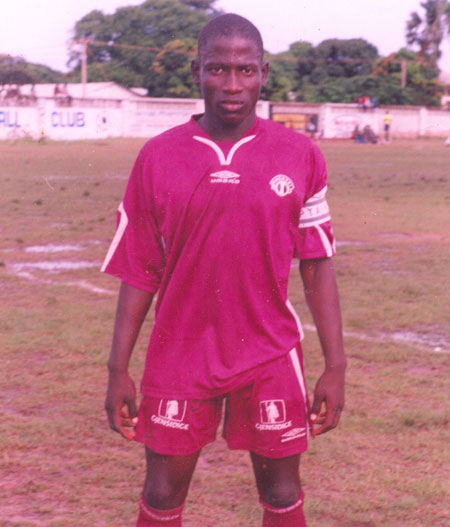 Born in Bakau New Town, Alagie began playing football in the streets of his home town like most of his friends do at a tender age.

The combative midfield maestro was part of Bakau New Town Primary School team that helped the school reached the semi-finals of the Primary School Football Tournament when he was a little lad a very important starting point for the young lad of his age.

Shortly after realising his potential with that academy, Gikata as he is widely known moved to GIFTS Academy where he also played an instrumental role in his 2 year stint with Saul Sowe's Soccer Academy and went ahead to help GIFTS progressed to the semi-final of the annual Norway Cup Competition, which took place in Oslo, Norway in 2006. But the Gambian side eventually suffered a narrow 1-nil defeat to neighbours-Senegal in the semi- final in 2006.

And upon his return from Norway with GIFTS Academy, the aggressive and hardworking midfielder earned himself a quick promotion to Ham Ham FC in the Second Division.

He made his first debut for the Second Division outfit in a hard fought 1-nil win over Nema United at the Serekunda West Mini Stadium in 2007.

After a great experience and a challenging year for the young lad in his first season at the club where he has struggled to hold down a regular first team place, Gikata was very instrumental in helping Ham Ham finished third in 2008, and went on to earn himself a place in the first team in the same year under the stewardship of former national team goalkeeper, George Lobba, who decided to quit the team shortly after guiding them to their most impressive league standard in the history of the club.

His creativity and great vision for goal could prove vital as his Unique FM side is hoping to put an end to its 9 years trophy drought.

The young prodigy is doing his utmost best to see how best he can find a way to the professional league in Europe with the Spanish Club Real Madrid touted as his most preferred club.

Alagie is also hoping to emulate his Uncle Ebrima Sillah who is described by many as one of the fierce-looking hit men the country has ever got.

The Scorpions skilful and committed Captain is also understood to have being a great admirer of the youngster.