Out of form Linguere FC that is enduring a miserable start to the summer championship secured their first win in the ongoing Bakau Nawettan after a 2-nil thumping over fellow strugglers Smiling Coast whose poor start to the Nawettan is showing no sign of abating.

Goals from Linguere's duo Sanna, alias Rasta, Bahoum and substitute Mustapha Saidy were enough for the Super cup title holders to collect the first victory of the summer championship after what majority described as the worst start to the season by the last year's league cup winners which led to the departure of the Head Coach Dawda Ceesay who occasionally blamed his Linguere side for failing to deliver as expected, including many other things. They are also struggling to replicate the form that made them one of the power houses in Bakau Nawettan over the past six years.

Linguere took the lead in the 32nd minute through Sanna Bahoum, aka Rasta when he converted the only penalty of the game after striker Sheriff Hydara was brought down inside the Smiling Coast penalty area by defender Ousman Darboe.

Smiling Coast's hope of recovering from their worst start to the Nawettan was dealt with a big blow when substitute Lamin Sonko was given his marching order, following a hefty tackle on Linguere youngster Lang Conteh.

Smiling Coast began the campaign with two defeats in a row which would likely put an end to their participation in the Nawettan next summer.

Despite going 2-nil down they made a promising start to the second half and should have netted their sporadic scoring opportunities, but the strikers completely scuffed their close range shots.

Linguere had a poor display in most part of the match, but grew into the game in the latter stage and began putting sustained pressure on the opponent's backline before doubling their advantage, courtesy of Mustapha Saidy's brilliant close range header close to stoppage time.

The win only gave them 3 points after three matches and they will go into their next game aiming to add another win in their ranks when they lock horns with Mamakoto in what could be described as a mouth-watering encounter when the two sides meet on Friday 8th October 2009, at the Bakau Mini-Stadium. 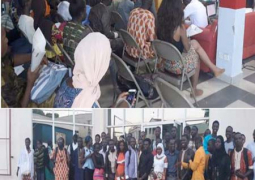