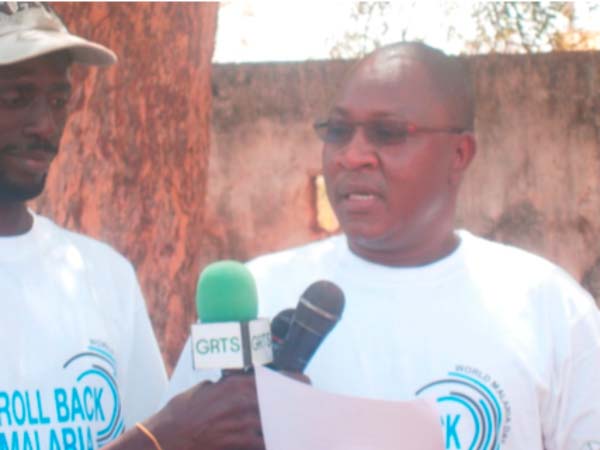 The private sector in The Gambia have been called upon to join the fight against malaria, as it is the most competent sector to mobilize the much-needed resources to meet the challenges.

The call was made during the celebration of World Malaria Day held in the Lower River Region on Saturday.

The National Malaria Control Programme (NMCP) under the Ministry of Health and Social Welfare spearheaded the WMD celebration in The Gambia, in collaboration with various units under the Health Ministry, as well as other development partners and UN agencies.

He said the theme for this year cerebration is: “Invest in the future-Defeat Malaria”, as the international community renewed efforts to assess progress toward zero malaria deaths by 2015.

According to DPS Ceesay, stakeholders would continue to report on the remaining challenges to reach the 2010 targets of universal coverage of malaria treatment and prevention, as called for by the UN Secretary General.

He said World Malaria Day represents a chance for all to make a difference, “whether you are a government, a company, a charitable organisation or an individual to roll back malaria and help generate broad gains in health and human development.”

DPS Ceesay also stated that malaria is a deadly mosquito-borne disease, which takes a million lives per year.

The heart-rending truth is that the world’s children, particularly those in Africa, shoulder much of malaria burden, he said.

He added that worldwide it has been estimated that 300 to 500 million cases of malaria are contracted every year, resulting in up to 2.5 million deaths, mostly among the very young.

He said that in Africa alone where 90 per cent of malaria deaths occur, malaria is the leading cause of death for children under 5 years of age.

In his welcome remarks, the programme manager, National Malaria Control Programme (NMCP), Balla Kandeh, said controlling and preventing malaria requires a collaborative effort from all sectors of the society.

No single person or unit could do it alone, he said, adding that everyone could help a great deal in advocacy, social mobilization campaigns and highlight the efforts made in combating the disease.

Mr Kandeh stated that the RBM builds partnership to mobilize global support and resources to reduce the malaria burden, a partnership which has remained strong in The Gambia, but there was the need and plenty of room for other sectors to join the partnership and help in combating malaria.

The private sector in The Gambia should, therefore, come forward and join the fight against malaria, as it is the most competent sector to mobilize the much-needed resources to meet the challenges, Mr Kandeh continued.

According to him, in The Gambia, a robust partnership is in place, uniting all key actors and stakeholders in malaria control to respond to challenges that no organization or government could face alone.

He urged all stakeholders to redouble their efforts in the fight against malaria by nurturing and strengthening the RBM partnership.

Deputising for the WHO country representative was Alpha Jallow, who said the WHO country office is committed to supporting the programme to achieve its objectives, and would continue to provide guidance on evidence-based strategies to better target malaria intervention, and in strengthening the existing health system toward a malaria-free Gambia.

LRR Governor Salifu Puye said The Gambia would continue to consolidate gains made in malaria control and prevention, and work toward achieving the strategic goal of malaria elimination by 2020.

The government under the leadership of President Jammeh launched Operation Eradicate Malaria in February 2008, he said, adding that with high political commitment over the years, malaria control efforts have been accelerated, and “this would be sustained for higher impact".