His Excellency the President of the Republic of the Gambia, Sheikh Professor Alhaji Dr. Yahya A.J.J. Jammeh will celebrate the prestigious award presented to him by the FAO in November 2014 during the 150th Session of the FAO Council in Rome, in recognition of The Gambia’s attainment of the MDG 1C target of reducing the prevalence of undernourishment in the country, made possible by His Excellency the President’s proactive and inspirational leadership of the farming community.

It would be recalled that His Excellency the President dedicated this award to the farming community in general and to women farmers in CRR, URR, LRR, NRR and WCR.

The celebration will be held in Kanilai from 30th January to 1st February 2015.The programme of activities includes recitation of the Holy Quran on Friday the 30th, exhibition of local agricultural products; a Zikarr Session on Saturday the 31st; a march-past by farmers, women and youth groups; and entertainment by cultural groups.

The Zikarr Session will be from 9 P.M. and it should be noted that no one-man group will be allowed to perform.

His Excellency the President, Sheikh Professor Alhaji Dr Yahya A.J.J. Jammeh invites everyone to participate in this national celebration. 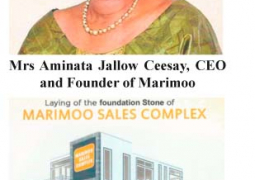