According to a press release issued by the Gambia Football Association, the President Yahya A.J.J Jammeh will give his blessing to an initiative, called 'Road To Nigeria' campaign that geared towards helping the association raise funds for the champions of in the forthcoming FIFA World U-17 Cup in Nigeria 2009.

The release, however, stated that "the executive committee of the Gambia Football Association has the greatest pleasure to inform the general public that the 'Road to campaign' will be launched at the Ocean Bay Hotel on Friday June 26th 2009."

The launch will be done in a form of pledges (money/resources) to facilitate the preparation and participation of the national U-17 team- the champions of in the forthcoming FIFA World U-17 Cup.

The ceremony, according to the release, will receive the blessings of H.E. Sheikh Professor Alhagi Dr. Yahya A.J.J Jammeh as the Chief Patron of the GFA.

"The President as usual will take the lead in pledging some money for the great national venture".

In this light, the GFA is soliciting assistance from all institutions/individuals to support H.E Sheikh Professor Alhagi Dr. Yahya A.J.J Jammeh's initiative to raise the requisite funds for the national U-17 team by pledging some money to the :Road to Nigeria" campaign.

Over 150 students graduate from LIPS 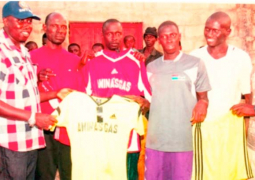