Both sides put up a respectable performance in the game and had many scoring opportunities in each other's goal mouth. But they failed to hit the back of the two nets in the regular time of play. Thus, the match went into a post-match penalty shoot-out, which ended 5-4 in favour of Black Pool FC.

As champions, Black Pool FC bagged a giant trophy and a cash prize of D5000 while Tisibi FC received D3, 500 as the runners-up.

The tourney was aimed at improving, developing and promoting football in Ebo-Town and its surrounding areas, particularly at the grassroots level.

The organising committee of the tourney are also planning to stage another tournament in the near future, to be sponsored by the Lord Mayor of KMC, Yankuba Colley as part of his contribution towards the development of football in Ebo-Town and its environs.

Important dignitaries and football gurus witnessed the final across Ebo-Town and its environs. 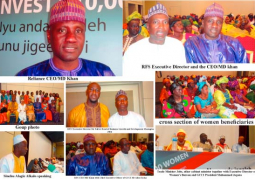