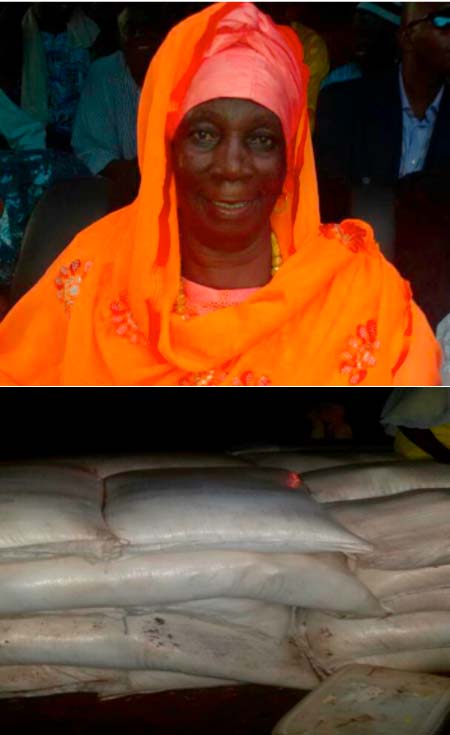 The home village association of Gambian leader President Adama Barrow called (Jimara Constituency Association for Development), in the Upper River Region  at the weekend received a donation of 200  bags of fertilizers and cash of D100,000,  more than700 mango seedling, and oranges  meant  to boost agricultural production and productivity in the said constituency.

The event was graced by the mother of the Gambian leader Ajaratou Jumma Jallow and attended by youth from the region, especially Jimara apex group supporters of the UDP as well as a cross section of the community.

The money was donated by the mother of the association, one Mrs Nenneh Jallow, based in Sweden but a native of the President’s home village Manka-mang kunda in the Upper River Region.

The presentation was done alongside the official launching of the association at a colourful ceremony held at President Barrow’s home village Manka-mang kunda in URR.

In his welcome remarks, the public relations officer of the Jimara Constituency Association for Development, Mr Malick Kanuteh, a native of hela-kunda village, seized the opportunity to hail the adopted father of the association Mr Lamin Jatta, for providing three bulls, six bags of rice and other important materials for making the event a success.

He said that prior to the intervention of Mrs Jallow the donor and Mr Lamin Jatta, each of the 86 villages in the constituency did make contributions but pointed out that Gambisara and Numuyel made the largest contribution.

He also commended the donor Mrs Nenneh Jallow for the bold initiative, while describing her as a patriotic Gambian who has her community at heart.

Speaking on behalf of the regional Governor in URR, Mr Fabakary Sanneh said the country cannot develop without the involvement of the youth, which necessitated the launching of such an important youth association.

He said it is good to see that the youth of Jimara are ready for development in the region and the office of the regional governor will give full support for the progress of the Association, Mr Sanneh said.

Also speaking, the president of the association, Mr Alhagie Edrissa Danso explained that they formed the association to bring all the residents of Jimara constituency under one umbrella for unity and development.

According to him, the association is currently embarking on a five-hectare farming to create cereal banking to provide credit to farmers during the rainy season, which is to be repaid after cultivation, Mr Danso explained.

He also expressed hope that the association will bring more development, unity and cooperation in URR, but warned that it is a nonpolitical association, whilst advising the youth of Jimara to stay away from any form of tribalism.

Delivering a word of wisdom on behalf of the President of The Gambia, Mr Dodou Sanno advised the people of the district to fully utilize the fertilizers and seedling.

He tasked the youth to prove to the association’s mother that they are ready to work for the success of the district while assuring that Madam Nenneh “will not” let them down.

Mr Sanno urged the people to rally behind the new government  pointing out that the old  practices of providing people with foodstuff free of charge during the rule of Sir Dawda Jawara is back.

He said the practice was stopped during the rule of the previous government but assured that President Barrow will bring it back to its glory.

Speaking on behalf of the mother of the association, Mr Samba Jallow explained that the Association has a huge task ahead.

He said if the 700 seedling are properly taken care of, they will be of immense benefit to them.

He encouraged excellent working relationship among them to nurture the development of the district, saying his elder sister is ready to help “if you are ready to work”.

Media accreditation for CAN 2013 qualifiers opened