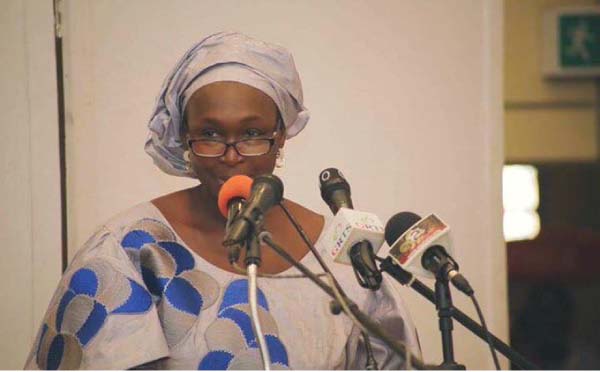 The spokesperson for President Adama Barrow has said that the president did not fail the people of Foni in anyway and the Gambian leader has expressed this in many instances.

“Even before he was elected, he went to Foni during his campaign and held meetings there to show that we are all Gambians. He even showed his relations with all ethnic groups of The Gambia. He went further to reveal his relationship with Foni where his sisters are married to Jolas; his nieces and nephews are also Jolas,” Amie Bojang-Sisoho told journalists last morning at the maiden press briefing.

Mrs. Bojang-Sisoho said the death of a Gambian in Kanilai which was as a result of a confrontation between protestors and ECOMIG forces, “Is deeply regrettable”.

“We extend our sympathy to the family of the deceased for their loss. However, we are pleased that calm has returned to the area and President Barrow encourages all citizens to be law abiding,” she said.

She said the president had sent a delegation to engage the communities in Foni for reconciliation.

“He believes that we are all Gambians and we have the interests of our country, which supersedes our own individual interests. Kanilai is integral part of Gambia and the decision for ECOMIG to be based in the country is for national security,” she said.

“After the first (initial) disturbances that took place in Foni between political rivals, delegations were sent to Foni, Kanilai in particular, so that they talk to the elders and make them understand that change has come, and it is the Gambians who have decided.  Kanilai should be part of that change because the president is the president of every Gambian and non-Gambians staying in this country,” the president’s spokesperson said.

“After the incident where a life was lost, he also sent another delegation to console the community and engage them for dialogue and reconciliation. So it is time to understand that change has taken place, governments come and go but The Gambia stays.”

Some key highlights of the press briefing:

The truth and Reconciliation Commission will be set up to begin hearing cases of violations, abuses and calls for justice by citizens by the end of this year.

Amie Bojang-Sisoho said by September, the truth and reconciliation commission will become law to enable it begin operations. The draft bill is already at the Ministry of Justice.

Mrs Bojang-Sisoho said the think tank will comprise 15 members; 9 men and 6 women from diverse disciplines and it will be launched by the president very soon.

A national development plan, 2018-2021, is being formulated. Cabinet has agreed on a formulation process of the draft plan to take into consideration the priorities of the new government as articulated in the coalition manifesto and the compact agreement agreed upon at the end of the cabinet retreat last month.

Government has agreed on an out-of-court settlement with the company. The company will remove its pipes from the sea, support a comprehensive ecological assessment, and restore damage done on the ecology.

In addition, the company will pay for the testing of the water to know how and why it was affected.

To promote continued good governance and transparency, all ministers have been asked to declare their assets by the 15th of next month.

Our foreign affairs and security authorities have noted it and are consulting their international partners. The president urges everyone to work towards the continued peace and stability of the country.

There is no intelligence failure because the information has not been validated by the national authorities. And the findings they have so far have not indicated that.

That is why they have been asked to consult and further discuss with international partners to find out their source and nature of the threat.