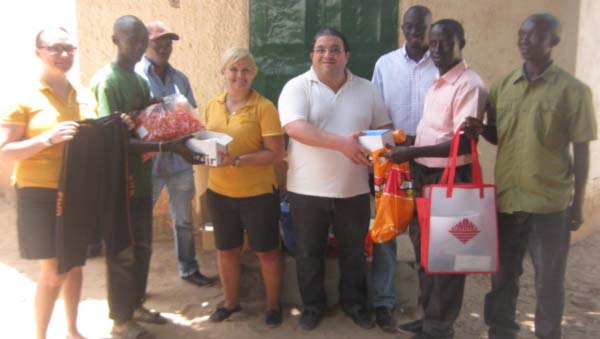 Gambia Tours and Thomas Cook, co-tour operators in The Gambia, Wednesday gave a handsome donation of educational stationery and materials to Bijilo Nursery School, at a presentation held at the school grounds.The gifts, including exercise books, pencils, pens, bottles, training gears, game pads and candy, were presented to the school authorities for onward distribution to the kindergarten children.

Gambia Tours managing director Charbel Hobeika, a native of Bijilo, said he was proud to direct the donation to the school, adding that Gambia Tours are neighbours to the school.According to him, Gambia Tours is a family-run enterprise which started in 1983 as a ground handling company meant to assist tour operators and help provide a solid structure for the tourist industry in The Gambia.

“We provide many services for local communities and tourists traveling from all over the world in the areas of hotel reservations, airport transfers, flights to Europe and a wide selection of excursions around The Gambia and Senegal, which allows you to enjoy the culture, food and the general atmosphere of this wonderful country,” he said.

Receiving the gifts on behalf of the pupils, the head teacher, Baboucarr Jobe, revealed that the current state of enrolment in the school is 230 pupils 129 of whom are girls between the ages of 3 and 6 mainly kindergartens, who need all the support to better prepare them for formal and normal schooling system in the near future.

“We are always grateful for any support that further assists us as teachers and pupils to achieve relevant education for all, as enshrined in the education policy, MDGs and other government blueprints,” Mr Jobe said.

Madam Kirsi Karjalainen, destination manager, said Thomas Cook and Gambia Tours are co-operators in The Gambia and have become the representatives of many different tour operators from Germany, England, Holland, Belgium, Spain, Italy, Portugal and most of the Scandinavian countries.

She said one of the reasons for choosing Bijilo Nursery School was because they are neighbours, thus commended the school for accepting their gifts and expressed hope that the gifts would be utilized accordingly.

Ebra Faal, chairman of Bijilo Village Development Committee (VDC), described the donation as laudable, and fully appreciated by the entire school administration and the pupils.“This has really demonstrated their loyalty to the nursery school and it came at a time when we are putting more emphasis on quality, accessible and relevant education for all,” the VDC chairman said.

Because of the interest and learning situation at the nursery, the benefactors decided to support the school, he said, adding that the government could not do everything; thus the contribution and support of NGOs and philanthropists is highly solicited.