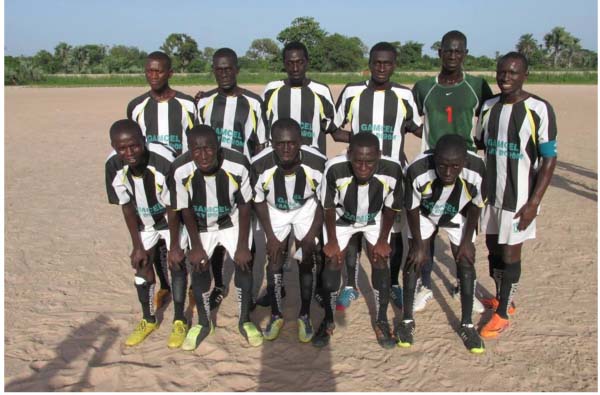 Solifo Investment FC, Gamcel FC and Late Dembo FC all sailed to the semi-finals in the ongoing Gunjur knock-out competition, after winning their quarter final ties played at the Gunjur Nyamina football field at the weekend.

Solifo Investment FC sealed a place in the semi-finals following their resounding 2-0 win over Kajabang FC in the first quarter final played on Friday.

Championship top scorer Yaya Touray aka Rapa and Ousman Sawaneh aka Rubin Van Persie were on target for Solifo Investment FC to boost their chances of clinching a double this season, after a several years of a trophy drought.

Gamcel FC beat whipping boys Sibindinto FC 1-0 in the second quarter finals game played on Saturday, with a goal from captain Sainey from the penalty spot in the second half to keep their hopes of winning a double this season, after failing to land silver ware last season.

Late Dembo FC progressed to the semi-finals as the Santos-based outfit came from one nil down to beat Commit FC 3-2 in the third quarter finals game to snatch a place in the semi finals.

Lamin Njie alias Njufa gave the digital device boys Commit FC the lead in the 17th minute of the game from a stunning header.

The Santos-based outfit regrouped and responded quickly for an equalizer, leveling the scores in the 20th minute of the game through an own-goal by Commit FC centre-back Jerreh Bojang.

Muhammed Janneh sealed victory for the Santos-based outfit in the 65th minute of the game from a spectacular close range strike to earn his side a place in the semi-finals.

Dawda Kebbeh, Kebba Sambo and Sulayman Gaye were on target for Istanbul in the 21st, 70th and 75th minutes of the game respectively, while Abuko United defeated KS Trading in a mouth-watering clash.