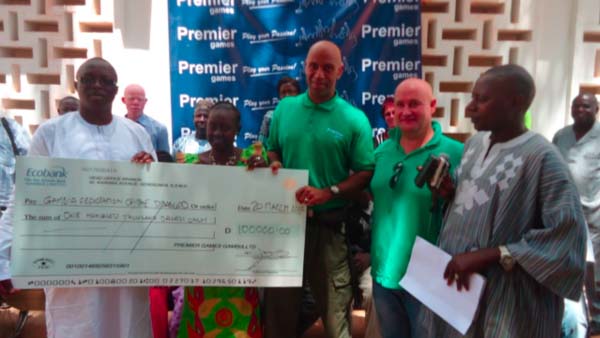 Premier Games Gambia Limited Thursday presented a cheque for 100,000 dalasi to the Gambia Federation of the Disabled (GFD) through the ministry of Health and Social Welfare.

The presentation ceremony attended by the minister of Health and Social Welfare, Dr. Omar Sey, senior health ministry, GFD and GTTI officials was held at the ministry grounds in Banjul.

Speaking at the ceremony, Falou Sowe, deputy director at the department of Social Welfare in Banjul expressed delight, and thanked Permier Games Gambia Limited for “the laudable gesture”.

“We are most grateful as the department and the ministry responsible for the promotion and welfare of persons with disability in the country,” he said.

The doors of both the department and the ministry of Health are open for any philanthropist who wants to contribute his or her quota to the well-being of the Gambian people, Sowe added.

He also thanked the GTTI for partnership with the department of Social Welfare in the training of persons with disability, to give them skills and enable them acquire employment.

Isatou Sanyang, chairperson of Gambia Federation of the Disabled, thanked the company, and declared her joy in receiving such help from Premier Game Gambia Limited.

The GFD had been partnering with the company to support them in education, in particularly, which she described as the backbone of any country.

“We the disabled people need higher education, and the step taken by Premier Games is in the direction and is in line with the government’s vision under the leadership of President Yahya Jammeh,” she said.

She also used the opportunity to thank the ministry of Health and its line department for the support being giving to the people with disability, to ensure that their welfare is been addressed.

Ms Sanyang urged other NGOs to emulate Premier Games in supporting the people with disability, so as to enable and empower them to contribute to the socio-economic development of the country

Ansu Mboge Aronsson, a Swedish-Gambia entrepreneur and the co-proprietor of Premier Games, who doubles as business development manager, told the gathering that it was part of their corporate social responsibility to contribute to the development of persons with disability.

It was just recently that he launched this Premier Games in partnership with his colleague, the operations manager, John Minally, and with the support of his mother, Linda Aronsson, in The Gambia.

He thanked President Jammeh for his call for Gambians abroad to come back to The Gambia and contribute to the development of the nation.

He said by virtue of his profession, his aim was to create job opportunities for Gambian youths.

He said Premier Games company offers entertainment and sporting activities, adding that it is a young company that was launched at the beginning of the year.

Currently, about 88 employees work for the company, which also has job opportunities for persons with disability, in terms of capacity building to make them productive members of the society.

“The company is partnering with NDEA and the department of Social Welfare with the support of a Swedish NGO to set up a drugs and alcohol rehabilitation centre”, he announced. 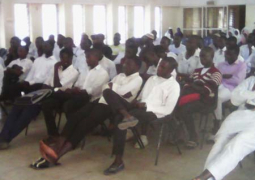 Tolerance in the teaching of the great prophet(s) and in liberalism: A contrastive analysis (Part 2)