We welcome the good news from Al Jazeera that “Al Jazeera Arabic correspondent Abdullah Elshamy has been released by the Egyptian authorities after spending ten months in detention”.

We wish to add our voice to calls for the immediate and unconditional release of Elshamy’s colleagues by the Egyptian authorities.

We associate ourselves with the statement issued on this latest development by Al Jazeera, which follows:

Elshamy had been in detention since 14th August, 2013, as he was arrested during his coverage of the disperse of Rabia’a Aladaweya sit-in in Cairo. He had been detained without charge for more than 10 months despite wide international calls for his release.

Commenting on his release, a spokesperson for Al Jazeera said:

“This is a relief rather than a cause for celebration. Abdullah has been through a terrible ordeal for over ten months. He’ll want to spend time with his family and recuperate. When he’s ready, we look forward to seeing him back in action, doing the vital job of journalism that he so clearly loves”.

“We would like to thank all who supported Abdullah’s cause; millions on social media, international and humanitarian organisations, media outlets which covered the case professionally and public figures across the world who expressed their support to Abdullah on several levels, proving their strong belief in freedom of journalism and its role”.

However, Al Jazeera Media Network calls for the release of the Al Jazeera English journalists Peter Greste, Baher Mohammed and Mohammed Fahmy who are still behind bars. A verdict in their case is due on 23rd June.

On 16 June, the global television network reported as follows:

Al Jazeera’s jailed journalists, Peter Greste, Baher Mohamed and Mohammed Fahmy will wait until June 23rd for the announcement of the verdict in their case.

In a final plea from defence lawyers, the court was reminded that this “trial is not a trial for these defendants alone – but a trial of all journalists.”

Al Jazeera’s Mohammed Fahmy, who was allowed to address the judge before the case was adjourned, also said: “This case is a political case.”

“Today was the final summation by the defence, again the weaknesses of the prosecution case has been exposed. On the balance of arguments, Al Jazeera hopes the judge will take into consideration the facts presented to him and acquit Peter, Baher and Mohammed of any wrong doing. On June 23rd, the entire world will be watching Egypt to see whether they uphold the values of press freedom”.

The fourth detained Al Jazeera journalist, Abdullah Elshamy, is held separately, and has been detained without charge for nearly ten months.

Calls for the release of all Al Jazeera staff have been made from the White House, the British Foreign and Commonwealth Office and the European Union. Similarly public calls of support for the #FreeAJStaff campaign have been made from prominent media personalities with over 60,000 people supporting the #FreeAJStaff campaign which has had over 1.2 billion impressions on Twitter. Various media freedom and human rights groups have also issued statements ranging from the Committee to Protect Journalists, the International Press Institute, Amnesty International and The Foreign Correspondents Association of East Africa.

“When the public’s right to know is threatened, and when the rights of free speech and free press are at risk, all of the other liberties we hold dear are endangered”. 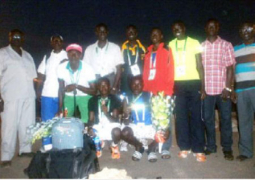