A two-day validation exercise of the draft policy framework for special needs education in The Gambia is underway at the St.John's School for the Deaf in Kanifing.

In her welcoming remarks at the opening ceremony yesterday, Mrs. Nancy Mendy, head of the Special Needs Education Unit at the Department of State for Basic and Secondary Education, stated, "special needs education as outlined in the 2004-2015 Education Policy is not an issue for schools or the Department of State for Education only. It is a whole system approach to ensuring that children with special needs get their share of the national cake," she noted.

She said that the aim of the validation is to build consensus on the document, to move the process forward and to advocate for the inclusion of special needs children in other national documents.

She commended Save the Children- Sweden for their financial support.

In declaring the forum officially opened, Mr. Modou Sanneh, director of Basic and Secondary Education, said, "special needs education is not something additional to or separate from the mainstream education provision but an alternative way of looking into educational development and responding to the delivery of learners' needs. A concerted effort is therefore required in this framework to teach literacy, numeracy, skills and livelihood skills to adults with disabilities through existing adult and non formal education programmes," he said.

In The Gambia, he said, education has been at the core of a wider reform, which has been directed at enhancing the system's effectiveness.

Mr. Matarr Baldeh, national co-ordinator of Education for All (EFA) Networks gave a brief overview of the policy framework. According to him, a situational analysis was made in 2006 in the country on special needs and girls education, which was followed by another analysis this time in advocacy. He revealed that after the first study, FAWEGAM, CPA, EFA and the Special Needs Unit were identified to carry out the mandate.

The ceremony was chaired by Mr.Demba Ceesay, register at and various stakeholders 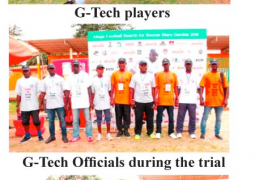