They were alleged to have assaulted 1st Class 2739 Omar Sisaho, 1st WC 3141 Mam Penda Camara and Bakary Colley while in the due execution of their duty.

According to the particulars of the offence, on at London Corner Serekunda, the accused persons assaulted the said police officers by throwing punches all over them.

Meanwhile the accused persons were each granted court bail in the sum of D10,000 with a Gambian surety. 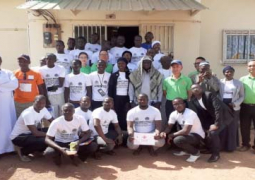