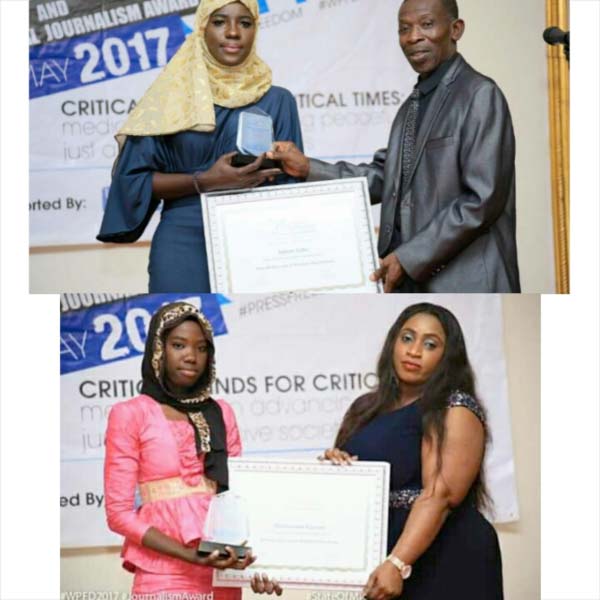 Two reporters from The Point Newspaper have bagged prestigious accolades at the 2nd edition of The Gambia Press Union National Journalism Awards held on Friday 5 May 2017.

Adam Jobe and Halimatou Ceesay were nominated for the best reporting in politics and lifestyle respectively which they subsequently won.

The duo are both columnists at The Point Newspaper. Adam Jobe is a Home Affairs Columnist while Halimatou Ceesay is a Columnist for the popular She-She-She section on women’s affairs.

For her part, Halimatou Ceesay, expressed her delight and honour to have won the award.

‘’I am happy that I became the winner out of three nominees. It is an honour to win the lifestyle award for an article that is my favourite. The ‘Mandinka traditional wedding’ is something I have always been curious about because it is only those that go through it who know about it,’’ she said

Halimatou revealed that the story, which required a lot of sacrifice and research, was one of her biggest breakthroughs which she never thought would win her an award.

‘’Pursuing the story was my biggest breakthrough and little did I know that it would win an award and for that I am grateful,’’ she said. She added that she was also happy that the majority of winners were female which shows that female journalists are doing wonders in the media.

Halimatou dedicated the award to her family and the entire readership of her popular column, SHE-SHE-SHE.

“I dedicate the award to my family, friends, loved ones and most especially my grandma who granted me the interview and also the bride who is my brother’s wife as well as the SHE SHE SHE column readership,” she said, while thanking The Point newspaper management and the editorial team for their support to her.

For her part, Adam Jobe said she didn’t expect to bag the award considering its tightness.

‘’Well, to be honest I did not see it coming because the competition was very tight, but Alhamdulillah I was able to make it to the shortlist and finally emerged to be winner,’’ she said.

She expressed gratitude to The Point Newspaper management and her “able editors for providing the enabling environment” for her to practise her passion and profession in the most conducive manner.

‘’I wouldn’t do justice without thanking The Point Newspaper for creating the atmosphere. My sincere and heartfelt thanks also go to the wonderful people of the GPU School of journalism and co-trainers who provided me with support, guidance and precious life lessons for me to be the Adam I am today,” she said.

Adam expressed delight at winning the award, saying it was a clear testament of her good decision to join the field back then when there were many doubts and challenges.

“Thank you for being with me through all the difficult times; your support and understanding gave me the strength to continue fighting. I am sincerely grateful to God for giving me such a loving family and friends. I feel blessed and thankful for all the motivation and encouragement I have received and still receiving,” she said.

Mr Pap Saine, Co-Publisher of The Point Newspaper, congratulated the duo for their hard work and commitment in the journalism profession.

‘’Adam and Halimatou have a bright future ahead because of their high level of commitment,’’ he said.

The Editor-In-Chief of The Point Newspaper, Mr Ousman Kargbo encouraged Halimatou and Adam and by extension, all her reporters to continue the hard work and maintain the momentum. He said he had four of his reporters nominated for the final prizes and two emerged winners.

‘’The awards speak well of them, but it also poses a challenge for them. That is to maintain the standard and even do better in such competitions. This can only be attained by reading widely, doing more research and writing incisively,” he said.