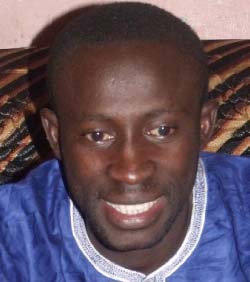 Lamin Drammeh, Assistant Sports Editor of The Point newspaper who left Banjul recently for Johannesburg via Dakar, to report on the Caf African U-20 Youth Championship in South Africa, is getting nurtured with experiences on the CAF high-profile youth championship.

The former Gambia Radio and Television Services reporter joined a host of other sports journalists across the globe for the two- week continental youth championship coverage that saw the Gambia fall to three of the continent's well established youth teams, with defeats from Cameroon and Nigeria and a draw with mighty Ghana who are both the defending African and the World champions.

For making his trip successful, Drammeh paid glorying tribute to the management of The Point newspaper for their timely contribution to ensure the trip a success.

Drammeh, who was voted the most outstanding male sports writer in 2009 by the Sports Journalists Association of The Gambia, was however full of praises for Liberty Sifuya of the United Kingdom, a FIFA qualified football agent, for what he described as his immense contribution towards his coverage to South Africa having contributed 75 per cent of his travel cost among other support.

"First of all, I would like to thank my friend, a brother and mentor Liberty Sifuya, for creating a rare opportunity for me to report on the Caf Youth Championship in ," said the 27-year-old Drammeh, who is expected back on May 3rd.

" is a Zimbabwean citizen resident in the with his parents. I came to know as a friend through The Point newspaper, who happened to be a regular reader of The Point's sports column.

"Since then, he has expressed his admiration for me and has since proven to be more than a friend but a honest and straightforward brother even though our relationship started less than a year.

"The fundamental emphasis of my relationship with is to scout, recruit and identify talented young Gambian players for him for possible trials in various football leagues around the globe."

Drammeh started his journalism career with the Gambia Radio and Television Services with the then famous Sports programme called Sports Round Up in 2008.

He moved to the country’s most Authoritative Newspaper The Point on 3 March 2009 and has since managed to establish himself as one of the most outstanding and promising sports writers in the country.

Meanwhile, another award-winning journalist Abdoulie Bah, who works with West Coast Radio as sports producer, was also in Johannesburg for the coverage of the Caf U-20 youth tournament which runs from 17 April to 1 May 2011.

The West Coast Sports producer has become the country’s youngest sports journalist to rotate on the four corners of the continent to cover the various international football events including two qualifiers as well as two championships, having travelled to countries like Ivory Coast, Tunisia, Rwanda and South Africa. 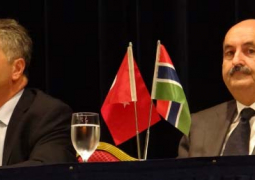