No one likes to leave his or her place of origin forcefully. But if this happens, such a person needs care and support.

The plight of the internally displaced persons should be the concern of all, since such people are vulnerable to hunger, and face many risks.

People who leave their countries, mainly due to political instability or other reasons, should always be given care by their host country.

In The Gambia, people are known for their hospitality, and this and many other values make us the of .

We encourage all Gambians to nurture this cherished culture of being welcoming and accommodating to guests.

It is very sad that, in , many people are leaving their countries as a result of political unrest, and suffer losses due to natural disasters such as floods, droughts and wildfires, among others.

This is an unfortunate situation that needs to be addressed, since there is no place like home.

We urge the internally-displaced persons, particularly those in the country, to integrate into the society and cooperate with their host communities.

It is important to note that The Gambia was among the first countries to sign the AU Convention for protection of and assistance to internally displaced person in .

It is also noteworthy that, over the years, governments of The have been supporting refugees coming to the country, including victims of the former Apartheid regime from and . 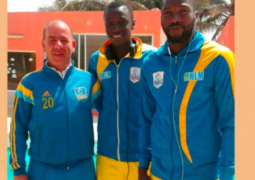