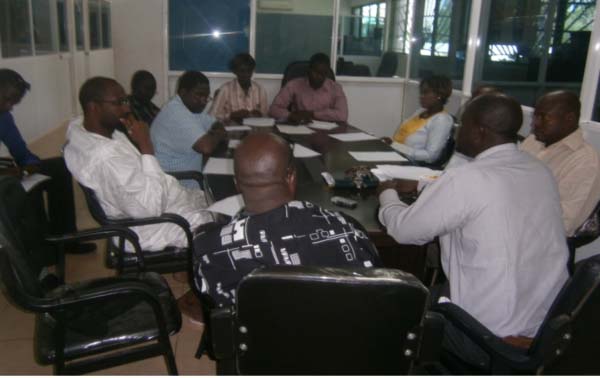 Members of the plastic waste management taskforce Thursday held meeting at the National Environment Agency’s office on Jimpex Road, which brought together members of polluters, producers and importers of plastic and plastic products.

Speaking at the meeting, Yam Bamba Njie-Keita, DPS Ministry of Environment, said plastic waste is a national problem, which is a concern to the President of The Gambia.

She said it was high policy and people need to be aware of it, adding that during the sensitization they should target the whole country and the recyclers should work with the municipalities.

Lamin Samateh, senior environment officer of NEA, said that to reduce the concentration of plastic waste, they provide plastic waste bins so that users of plastic bags could drop it in the bin after using it.

He said the taskforce raised some funds which was used to purchase the bins and were given to municipalities.

Mr Samateh said 45 bins were given to KMC, 15 to BCC and 7 to West Coast Region which they intend to add and also extend the initiative to other regions.

He said the aim of the plastic waste bins is to safely keep disposed plastics so it could be recycled.

He said the health impact that plastic waste have on people and animals is very serious and the issue of banning it completely would not also help since The Gambia is a developing country, which was why they came up with the strategy.

Mr Samateh added that Gamplast started to come up with a recycling plant and they are currently constructing their plant in Brikama and the bins would be collected by them which would also create employment for young people.

He said when they introduce it to the municipality, it took KMC time to install it and when they went on monitoring they find out that the bins are not properly monitored and people are using it for different purposes.

Muhammed Jabang, senior programme officer of NEA, said the plastic waste bins are good and there was nothing wrong with the dropping of plastic waste in it because if it is too big people would dump in other things.

He said sensitization is important because in Banjul while installing the bins they took to the street and sensitized people about the bins.

He added that for KMC it took them a year to install the bins and when they did it they did not sensitize the people about its usage.

At the meeting, members also said there was need for the NEA to enforce the anti-littering law against those who throw plastic waste in the street.

They also said there was need for awareness creation so that people could know the usage of the bins, and Gamplast also said that very soon they would start collecting plastic waste for recycling.

They also urge members of the precious water producers association to pay the monthly fee of D300, which the taskforce could use to control plastic waste.