The Director of Physical Planning was earlier subpoenaed to testify as the fourth defence witness.

Richards is being tried of giving false information and sedition.

Momodou Colley told the court that he resides at Kololi village, and is the Director of Physical Planning under the Ministry for Local Government and Lands.

He said that in 2007 he was the principal officer dealing with the execution of court orders at the department of Physical Planning, adding that, in the same year, he went to Jabang village with his juniors.

On that particular day, Kolley added, he received a phone call from the then director of Physical Planning, Kebba Ceesay.

"Upon arrival in the village of Jabang, I saw about 17 Police Intervention Unit officers with their guns and other people from the High Court. They were throwing people’s belongings outside their houses," he continued.

"I asked them which department were they from, and they said that they were from the High Court, and that the court ordered them to evict the people of Jabang from their houses," he said.

He added that one Basiru Ndow led the team to the village of Jabang, and that he introduced himself to Ndow and one of the staff from the Sheriff’s Division of the High Court.

"I told him that this execution has been stopped by the court, but the team insisted that it was a court order," he continued.

Kolley said he further told him that there was a department responsible for the execution and demolition of houses and building structures if it is permitted by the physical planning department, but not the way you are doing it.

He said that during the push and pull, two NIA officers who were at the scene supported his suggestion that the execution exercise should be stopped.

But Mr. Ndow insisted that this was above his level, and he could not stop the execution because it was a court order, unless they spoke to his (Ndow's) boss.

"I agreed to signed, but before I put my pen on the piece of paper, the former Chief Justice, Savage, and the then Minister for Local Government and Lands Ismaila Sambou called to inform me that they were on their way to Jabang.

"Upon their arrival, I explained to them exactly what I told the villagers," he went on, adding that the then Chief Justice told the officers to stop the execution and go back to the office to look into the issue, which the officers complied with.

Colley added that on the following day, when he reported for work, wrote to the then director of Physical Planning.

The said letter was later tendered in court for identification purposes.

He said when the memo reached to the director, he signed and a few days later he received a letter from the office of the Chief Justice inviting him to a meeting.

The said letter was also tendered in court for identification purposes. 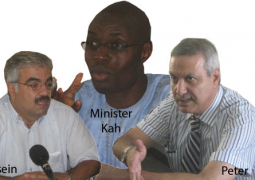