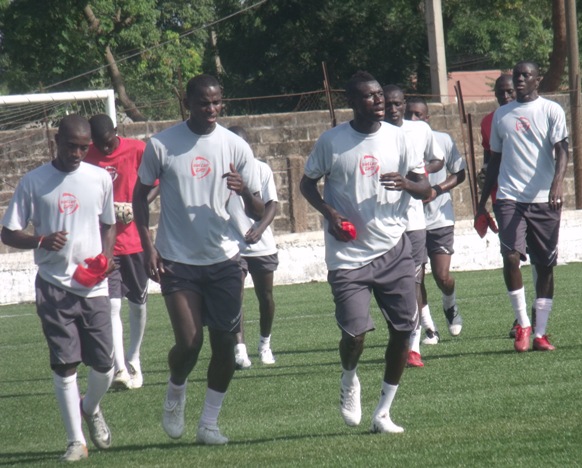 Paul Put, the head coach of the Gambia senior national team, has expressed dissatisfaction over the inconsistency of some players in the squad, who have not been regular in training.

Coach Put has since a week ago begun an intensive training with some of the foreign-based players who are in the country for holiday.

He however used the opportunity to bring the boys together by conducting training sessions at the Brikama Box Bar Mini-stadium in preparation for the upcoming Olympics Games qualifiers against Benin in Cotonou in March.

But the Belgian tactician is totally dissatisfied with the behaviour of some of the players who are refusing to turn up regularly for training.

Paul Jatta, Abdourahman Dampha, Pa Saikou Kujabi, Momodou Ceesay, Aziz Corr Nyang and others, according to Coach Put, have not been regular at training.

“Even though the training is not an obligation on the players because they are not in camp, since we have always been talking about the need for the team to qualify, I was hoping that the players will sacrifice their time for their country no matter what,” Paul told Pointsport yesterday.

“I could have stayed in Belgium to enjoy the holiday with my family but since I realised that this Christmas holiday could be the opportune moment to work with the players for the Olympics Games qualifiers as well as the forthcoming Africa Nations Cup Qualifiers, I decided to conduct the training camp to enable the team to remain fit ahead of the international competitions,” he said.

“We are still without a complete team because most of the players are not playing active football in their respective clubs abroad; this is why some of them who are on holidays were invited to train with the team in order to regain their fitness.”

The Belgian tactician who has set his eyes on leading the Gambia to its first ever African Nations Cup finals, said: “I need the players to be in camp so that I can have authority over them but since there is no money for that, they need to show their commitment and dedication despite being in the country on holidays.

“It is a pity because I was hoping that we will work out something; we have been wasting time by losing friendly matches. The players should therefore be willing to come together to train if we want to qualify.”

Other players who have been training on a regular basis, according to Paul, are the likes of Abdou Darboe, Ousman Jallow, Lamin Sarjo Samateh, Omar Colley and Omar Jasseh.

The coach was however full of praises for out-of-favour Brondby forward Ousman Jallow, whom he described as a role model among the entire squad.

“Ousman Jallow is a role model among them because he has always been coming for training consistently. He is disciplined and has the qualities of a team captain,” the Belgian born coach says of former U-17 hit-man Jallow, who is constantly being linked to a January move away from the Danish outfit Brondby.

“If we have 16 Ousman Jallows in the team, we can be sure of a qualification,” Paul said.