The Programme Officer at the National Council for Civic Education (NCCE), Dawda Jallow, has said that parliament is a key governance institution, and noted that engaging citizens should be at the core of its functions of representation, legislation and oversight.

Mr. Jallow made this comment when he was presenting a paper on the topic: "Civic and Voter Education". The paper was presented on Friday at the just-ended three-day Regional Outreach Forum for National Assembly Members held at Tendaba Camp in the Lower River Region.

The theme for this first-ever forum was "Honourable Members' Representative and Oversight Functions Under Social Audit".

Mr. Jallow said engaging citizens in decision making that affects their lives is essential to good governance, adding that the legitimacy of Parliament has rested upon the notion that Parliament is the institutional manifestation of political representation in society. Mr. Jallow said citizens are calling for greater transparency and accountability from their government institutions, thus public institutions including Parliaments needs to make significant efforts to connect to the public, strengthen relations and engage citizens.

According to Mr. Jallow, citizens' participation in a democratic society must be based on informed, critical reflection and on the understanding and acceptance of the rights and responsibilities that go with that membership.

In a democratic society, Mr. Jallow continued, the possibility of effecting social change is ever present if citizens have the knowledge, skills and will to bring it about.

He said Civic Education assists citizens to understand the process, values and system by which they are governed, and the means by which they can affect those processes, values and systems. Mr. Jallow asserted that the ideals of democracy are most completely realised when every member of the political community shares in its governance, adding that members of the political community are its citizens, hence citizenship in a democracy is membership in the body politic.

Presenting his paper on the topic: "Governance and Decentralisation", the Permanent Secretary at the Ministry of Local Government and Lands, Saikou Sanyang, told parliamentarians that accountability is a key requirement for decentralised good governance, and is applicable to both the public and private sector, as well as civil society organisations.

He said accountability can neither be enforced nor achieved in the absence of transparency and the rule of law.

Mr. Sanyang added that decisions taken and their enforcement should be done in a manner that strictly adhered to prevailing rules and regulations, and that there is reliable, wholesome, factual, timely, easily understood information, which is freely available and directly accessible to those who will be affected by such decisions and their impartial enforcement.

Other speakers at the closing ceremony were the Speaker of the National Assembly Hon. Elizabeth F.Y. Renner who delivered brief closing remarks, the NAM desk officers for NBR and LRR Honourable Cherno Cham and Njie Darboe and the Chief of Kiang Central District, Demba Sanyang. Ms Isatou Conteh moved the presentation and adoption of the conclusions and recommendations of the workshop, while the deputy Speaker of the National Assembly, Abdoulie Bojang, chaired the closing. 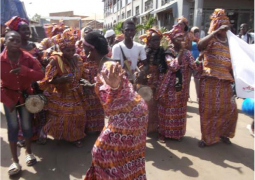 Being Realistic is Not Being Pessimistic