The criminal trial involving Sait Gaye, Sidat Fofana and Demba Njie, who are facing two count charges of store breaking and stealing, recently proceeded before Magistrate Babou Jobe of the Kanifing Magistrates' Court, with the testimony of a prosecution witness.

Testifying for the prosecution, one Modou Mbye, a resident of Latrikunda Sabiji told the court that he is a businessman and he recognised the accused persons in the dock.

He told the court that on the 28th January 2009, the first accused person brought him seven gallons of oil for sale at a cost of D450 each.

He told the court that after sometimes the accused person and a partner came with (CID) police officers to his shop.

He adduced that there the first accused told the officers that he sold the oil to him (Modou Mbye) and he was later taken to Banjul Police Station were he was questioned and he made a statement to that effect.

It was alleged that the accused persons on the 20th January 2009 at Gamveg Oil Company at broke the store and therein stole 40 gallons of 20 litres oil, valued at D26, 400.00, the property of Issam Bazzi. 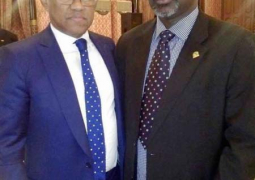