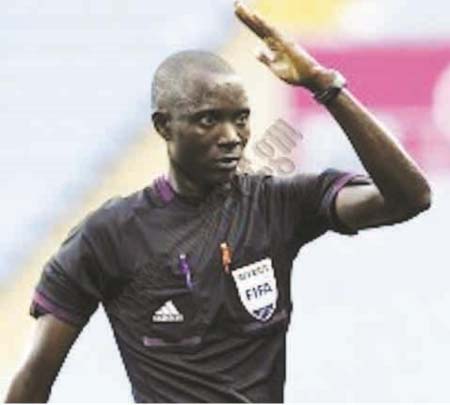 Gambian and FIFA referee Bakary Papa Gassama was last Thursday named the 2014 African Referee of the Year at the Confederation of African Football’s Glo-Awards ceremony held in Lagos, Nigeria.

Gassama, who finished second in last year’s edition, will later this year participate in his fourth consecutive African Cup of Nations finals.

Gassama has a huge amount of experience as a referee in his home country and on the international stage.

He refereed in the semifinals of the Confederations Cup earlier this month, and also made history when he officiated two games in the Qatari domestic football league last month and became the first non-Asian referee to do so.

All of this came about following a Memorandum of Understanding with the Qatari Football Federation and Fifa in terms of refereeing assistance.

This Memorandum of Understanding allows for continental Africa to assign its top referees and assistants to officiate some of the toughest and fiercely contested games in the Qatari Super League.

As part of the implementation stage of the agreement, Gassama, who was voted as one of the seven best referees by Fifa’s Referees Committee at this summer’s World Cup in Brazil, became the first African to be appointed for the assignment.

Papa Gassama is no stranger to tough encounters between the African continent’s top teams.

Papa Gassama became a FIFA referee in 2007, and three years later officiated at the 2010 Africa Cup of Nations in Angola. He also officiated at the 2012 Olympics in London, in which he was the fourth official for the finals (gold medal) match between Mexico and Brazil.

He was named by the world football governing body, FIFA, as the official in charge of Nigeria’s deciding World Cup qualifier against Ethiopia in Calabar last November 2013, and for many more high profile qualifying matches.

Meanwhile, after receiving news of Papa Gassama’s honour, Gambia Football Federation (GFF) president, Lamin Kaba Bajo, issued a statement in which he said Bakary Papa Gassama’s award by CAF is an uplifting and heartwarming milestone at a time when Gambian football is having a new and better beginning.

On behalf of the entire football fraternity, Bajo congratulated Papa Gassama and respectfully dedicated the historic and special award to President Yahya Jammeh the chief patron of the GFF, whose contributions to football development is acknowledged, appreciated and celebrated.

The GFF have enjoyed and continues to enjoy an extraordinary and valuable support from our sports-loving President, whose motivation and guidance leads to an exceptional performance of our athletes and the winning attitude of Bakary Papa Gassama, Bajo stated.

“Bakary Papa Gassama’s hard work and abiding interest to excel on the global stage to serve as a viable referee and a clear-headed ambassador of the Gambia to the world has indeed transformed the history of Gambian football and brightened its prospects”, he added.

“As a result, the incredible performance of Bakary Papa Gassama by winning such a prestigious prize for the country and counted as the first in Africa enlightens our hearts”, he went on, while assuring all and sundry that the GFF under his leadership would continue to recruit, train and prepare referees for future national and international assignments.

“As stated in my Manifesto, substantial and tangible work has already started to create many more Bakary Papa Gassamas in Gambian Football”, Bajo declared.

This is a clear testimony and manifestation of the high quality of refereeing our team of dedicated referees are doing to raise the Gambian flag high in the international football arena, he went on.

“The Gambia Football Federation is very grateful and pleased with the high level support the Federation is receiving from the Government of The Gambia through the Ministry of Youth and Sports under the leadership of Honorable Minister Alieu K Jammeh and the National Sports Council in the execution of its mandate to develop football in The Gambia,” Bajo concluded.

Easter Message 2014 from the Most Reverend Robert P. Ellison CSSp Bishop of Banjul