Pan-Africanism and renaissance is the theme for the 21st summit of heads of state and government which coincided with the AU’s golden jubilee celebrations on Saturday 25th May in Addis Ababa, Ethiopia.

Under this theme, experts say Africa will be looking at that spirit of pan-Africanism that inspired through solidarity and unity of purpose for us to be able to get rid of colonialism and its shackles.

While so much has been written about how to move Africa forward along the path of peace, progress and prosperity, experts have identified challenges that are endemic to the continent.

They include poverty, disease, hunger, destitution, war, corruption and leadership crisis. According to the experts, all of these challenges bog down the continent.

The challenges are like a hydra-headed monster: as one challenge is tackled another one springs up, leaving experts rather bewildered as to how to go about the Africa Question. The upshot is that most people have already given up on the continent as a lost cause.

This explains why there is so much brain-drain, and why illegal migration is now the norm among African youth.

However, Africans must never despair.

The first step, surely, is to have faith in ourselves, in our products and in our values. In some parlance, this is termed as mental emancipation. If we believe that we are inferior, we will act inferior. If we think in a positive fashion, then we can turn the continent around.

We should as a matter of necessity and urgency clear our minds of defeatist sentiments like “nothing works in Africa”. Everything and anything can work on the continent if we put our minds to it and exert ourselves to put our positive and constructive thoughts into action.

Also, as the world continues to grapple with the effects of the global economic downturn, our part of the world must not stand aside, merely watching.

Africa’s massive economic potential, when properly utilised, could make Africans a rich people, depending on their natural land resources, and without the need for external aid.

Africa today is shining and radiating with brightness. It is a solid and strong continent whose peoples are the mainstay of its power and wealth.

It is however rather unfortunate that, despite its vast resources and market, the African continent has little to show in terms of Africans being united, so as to be in a position to exercise needed clout in the international arena.

Africa has to rely more on itself by boosting the continent’s productive sectors, and increasing trade among countries. Without this, we will only be enriching others, and making ourselves poorer every day.

“Africa for the Africans... at home and abroad”. 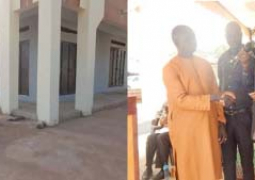