The delegates attending this year’s National Youth Conference and Festival (NAYCONF) have been speaking to The Point on their feelings regarding the 2010 NAYCONF.

Abdoulie Minteh, a delegate from Lower River Region, says NAYCONF, generally, has given them the opportunity as young people to come together and discuss issues affecting them. Mr Minteh adds that the forum is a venue to interact among themselves.

The theme for the conference is suitable, he says, adding that ‘if you want to eliminate corruption you have to start with issues of drugs’. Drugs are serious threat to society and youths are very vulnerable in issues relating to drugs; there is need therefore to enlighten young people who are the future leaders of the country.

Minteh says the forum has empowered him a lot and advices the youth to unite and work together and for their own good. The need for youths to come under one umbrella is important to avoid duplication of work, as most of them have the same aim and objectives. He also challenges the National Youth Council to identify various youth groups with similar interests to partner rather than stay in isolation.

Jahid Ahmed, from Osmani Trust and Human Head, the , said NAYCONF is very inspiring. “The youth in The Gambia are very motivated,” he said, adding that he was in The Gambia prior to the event, as part of a team of rewarding scheme to youths doing good jobs in the country.

“NAYCONF is a very excellent and vital initiative, especially in tackling drugs and corruption at an early age,” he said. He applauded the youths for taking part in the forum.

He also said his organisation’s project deals with vulnerable youths that are at risk of taking into drugs. He further commended the government for facilitating NAYCONF, saying is a good initiative for youths at both local and national level.

Mr Ahmedi urged the youth to keep to their values and principles and never to let anyone from outside change them from their roots.

“This year’s NAYCONF seems to be much more focused compared to the previous ones that I attended,” he said. “I only hope that at the end of the day, our recommendations and resolutions would be implemented by the authorities and us the young people.”

He however said he was disappointed with the organisers for not producing NAYCONF Daily newsletter this year. “This is unfortunate on their side because I see no reason why they decided to drop this wonderful initiative. I also see it as a deliberate attempt on the side of the national organising committee that they do not give priority to information,” says Jawneh.

Coming back to the theme of the summit, Jawneh said fighting drugs and corruption requires collective efforts by all and sundry.

For his part, Ibrahim Sawaneh, a conference delegate from the in Basse, highlighted similar sentiments as did Mr Jawneh, saying this year’s NAYCONF is very interesting.

He says this year’s event compared to previous ones is far different as it is very educative.

“As youth it is our responsibility to solve our own problems, to contribute for the suitable development of our country,” he says, adding: “Discouraging drugs and corruption is very vital.”

“I learnt a lot in these five days,” he said. Jallow urged youths to desist from consuming and trafficking drugs.

Aminata Hydara from Africa Youth Coalition against Hunger AYCAH-Gambia chapter said that a lot of attention has been given by government in this year’s NAYCONF.

She said it was good for them as youth to also meet and interact with various ministers who attended the youth gathering.

Commenting on the theme, she said it is very important and was shocked by figures given by the National Drug Enforcement Agency regarding drug cases most of which involved the youth.

She urged the National Youth Council to work closely with the National Youth Organisations in making follow-ups to the resolutions. “I was very much impressed with the cultural activities as well. It means that as young people we know our cultures,” she says.

Abdou Jatta, a youth leader and member of the conference sub-committee, said everything went well with them thanks to the support given by the government and partners.

He says the event is very important for youth all over the country and beyond as they are able to meet and discuss issues affecting them.

He described the theme as important saying that  “drugs and corruption are rampant”.

Jatta urged delegates to share the resolutions with their friends in their respective regions.  “Since youth are the fabric and cream of the society and also more vulnerable to drugs, I think the theme is quite fitting,” he says. 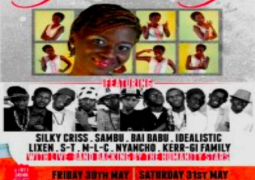