The Ba-Nafaa project in The Gambia, in collaboration with Coastal Resources Centre, University of Rhode Island in the USA, last Thursday convened a one-day Oyster Fishery Co-Management forum at the Atlantic Hotel in Banjul.

During the forum, participants reviewed the activities that have been undertaken by the Ba-Nafaa project since the last Oyster Fishery Co-management training in February 2010.

Other topics covered included the Oyster Stock Assessment study, the validation of the PRA report, the Oyster Aquaculture Programme, and the TRY Association sub-contract with WWF.

In his welcoming remarks on the occasion, the manager for Ba-Nafaa project in The Gambia, Ousman Drammeh, underscored the importance of the forum, saying it was an avenue for participants to share some of the things learnt at Rhode Island University in the past months and to put some of the theories into practice.

Mr Drammeh urged participants to be more proactive to bring on board issues that are of paramount importance to the forum and to discuss the way forward to finding solutions to some of the shortcomings.

Speaking earlier, Dr Brian Crawford, Director of International Programs in Coastal Resources Center, University of Rhode Island, said USAID had given them grant to support the Ba-Nafaa project and TRY Women Association to manage the coastal resources in The Gambia.

According to him, the Fisheries’ Act in The Gambia has empowered the women to manage the fisheries resources in a sustainable manner by ensuring the mangroves are protected from all forms of exploitation, as these are the areas fish use for spawning.

He noted that women should also participate in research and should also be empowered to take part in decision-making as far as resource management is concerned.

"The University of Rhode Island provides capacity building training for Ba-Nafaa and Try Women Association to equip its members on how to manage resources," he said.

Dr Crawford stated that with his twenty-five years of work experience around the world, he is ready to share some of the success stories he has leant about with his Gambian counterparts.

He urged the participants to jealously exhaust all the topics on the itinerary to ensure justice is given to the forum to achieve the desired objectives.

He also used the occasion to thank the USAID for supporting the Gambia protect and for promoting and managing the coastal resources for generations to come.

"We put the women together and teach them some of the issues surrounding their work and how to harvest oysters without spoiling the environment."

Isatou Faal Jobe, a board member of TRY Women Association, revealed that one of the significant moves that have been made by the association is the creation of alternative livelihoods for its members. "This is meant to create an avenue where women will engage in something for their living during oyster off season," Mrs Faal-Jobe said, adding: "The lives of the women have been improved, as there is better cooperation and understanding among the members." 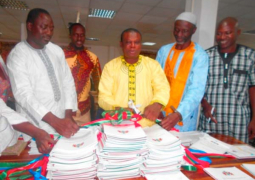