Oxford United FC was last Saturday crowned champions of the 2009-2010 Gunjur Nawetan League Championship, following their 5-4 victory over Nyokoyorr FC in a post match penalty shoot-out after 1-1 draw in the 90th minute of the game, at Gunjur Football Playing Ground.

As the champions, Oxford were bagged with a giant trophy, medals and a cash prize of D15, 000, while Nyokoyorr FC received a trophy and cash prize of D10,000 as the runners-up.

Mamadou Clark Bajo was awarded as the best players of the tournament and went home with a trophy and a cash prize of D250, while Yusupha Barrow who was awarded the leading goal scorer of the tournament received a trophy and cash prize of D250. Bubanding Bajo and Lamin Fise Touray were also awarded with trophies for their tremendous contributions towards the development of football in Gunjur.
Share Article
Share on Facebook
Share on Twitter
Share by E-Mail
Share on Pinterest
Share on LinkedIn
Share on WhatsApp
Previous:
Farato Academy FC coach is optimistic
Next:
Scorpions returns home after making history 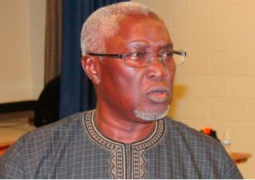