Over 30 women receive certificates at BAC 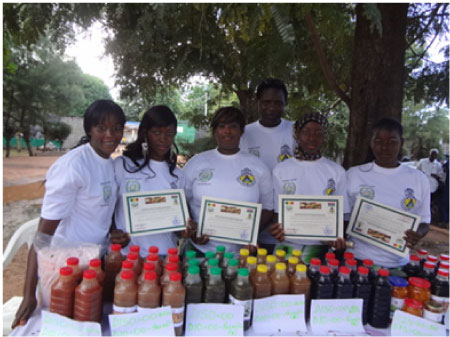 The training was organised by the Brikama Area Council (BAC), Grand Yoff Municipality of Senegal and Samasang Federation

The training was aimed at empowering women and exposing them to some of the techniques and alternatives to preserve and produce mangos and other fruits.

The presentation of this certificate was graced by the mayor of Grand Yoff in Dakar, chief executive officer of BAC, chairman Kuntaur Area Council, NAM for Kombo South, and other top officials of the BAC.

Speaking on the occasion, the chairman of Kuntaur Area Council, Lamin Ceesay, expressed delight for the opportunity accorded him to give a peace of advice to the participants.

He said his presence at the very important gathering at BAC is a clear manifestation of solidarity that has been enjoyed by the sister councils within the country.

He then thanked the two countries for their bilateral relationship in ensuring that women are empowered with the rightful skills.

He added that the knowledge gained during this weeklong workshop is here to stay and challenged them to filter the information to the grassroots level.

In his welcome remarks, the chairman of the BAC, Sunkary Badjie, expressed similar sentiments for being given the opportunity to deliver a statement at the end of the training on food transformation processing and conservation. He went further to dilate on the importance of the training in the history of the council.

He added that the day is especially marked and set aside by the women of West Coast Region, which shows that their role is important in the society and key to the national development.

For his part, the BAC CEO, Tamba Kinteh, said the training is in line with the programme for accelerated growth and employment (PAGE) and also inline with the MDGs.

He said that during the weeklong workshop, participants were exposed to many aspects in food transformation and it will foster the mutual relationship between women group of the two municipalities and improve the economic wellbeing and livelihood of the participants among others.

He said the BAC is very proud to be associated with trainings like this women skills empowerment.

He also challenged the participants to make the best use of the knowledge gained during the training that will yield impact on their livelihood.

He said the collaboration and partnership between Grand Yoff Municipality and Brikama Area Council are a clear indication and manifestation of the blood relationship between people of the two countries.

In his closing official statement, the governor of West Coast Region, Lamin Sanneh, thanked the organizers for the laudable initiative.

He underscored the importance of the training geared towards improving the livelihood of our women in the two countries.

He said the knowledge will go a long way in helping to empower the women.

He advised the two councils to continue their bilateral relationship in the best interest of the two countries.

He said this skills training is a big achievement for The Gambia. He urged the participants to utilize the knowledge gained from the training.

Other speakers included the mayor of Grand Yoff Municipality who also stressed on the need for the two countries together as one family.

He also hailed BAC for their hospitality and for ensuring that the training becomes a success in The Gambia.