Our destiny is in our hands - GPA Asst Coach

Haji Tunkara, assistant coach of the Gambia Ports Authority (GPA), has said their destiny is in their hands.

He also cautioned the club saying they are not still safe from being relegated to the second division league.

Tunkara made these remarks on Saturday while speaking to reporters following his side’s 1-1 draw with fellow strugglers, Seaview FC, in their week-21 encounter of the GFF first division league game played at the Serrekunda East Mini Stadium.

He added: “We are still struggling to maintain ourselves in the topflight league and will fight to the wire to save our lives.

“We still have a lot to fight for; every match is important and we have to keep fighting to the end.

“Our final game of the league will be difficult but we will work hard for it and fight to make sure we collect the maximum points and save our lives.”

The game was tough as Seaview FC are also in the relegation zone, he noted, saying it was also physical.

“Seaview FC have been on form and we knew the game was going to be difficult,” he also said, adding that they prepared well for it.

Commenting on the appointment of Alagie Sarr as head coach of the team, he said: “Alagie Sarr is a well experienced coach and has been with the team previously. He was able to win trophies with the team; so it’s just a continuation for him, which will not be difficult because he knows the team.”

As a young coach, he has a lot to learn from Alagie Sarr, he said, adding that it is pre-mature for him at the initial stage to take up as head coach of the team as he still needs more experience. 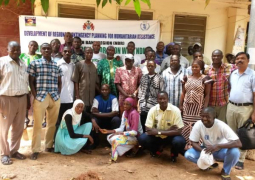