The Gambia is now a politically charged nation with the registration of 14 political parties. The events of the 3 years Jotna, the 5 years Barrow Movement, the Victims Centre Protest March, and the unending UDP rallies, etc. among others, have all shown the vibrancy of the democratic system. We are also seeing actions geared towards political expediency by the incumbency in furtherance of his political ambitions.

The biggest political parties are namely: the UDP, APRC, GBC. The small parties include PDOIS, GMC, NRP, GBDP. The newest parties include GFA, GAP, NRP, APP, CA, etc. The road to the State House in 2021 will be rough, tough, tedious and expensive. It is to be noted that there is a new wave of generational consciousness that the politics of deceit cannot sway into voting for the wrong party and leader. It will be interesting to see who will winthe confidence and trust of the Gambian people in 2021.

The most interesting development in the political equation is the formation of a party by Barrow. It is clear therefore that he has effectively ended the coalition 2016 agenda and decided to go for a full 5-year term of office. This by implication in my view, he cannot seek for a third term in office under a new constitution. In any case, Presidency is the peoples power and not personal to holder. If it were personal to holder Jammeh would not have been flushed out of government in 2016.

In the light of the proliferation of political parties in the country and taking into account the proposed new constitutional requirement of 51+ for a winner of the Presidential race in the first round of voting, it is unlikely that a single party can win outright in the first round. We might as well see the emergence of a coalition: Would Gambians make the same mistakes of 2016 elections in which political arrangements were hurriedly put together only later on to land the country into a big political mess we are now experiencing? It is hoped that any future coalition arrangements will bother to look into the legal, moral and political ramifications to spare the country from troubles that will threaten the fabric of society.    Political office, it must be emphasized, is not an opportunity for one to get rich but it is an opportunity for one to serve the people and to serve them well. It is therefore expected that all aspirants whose eyes are on the prize for the next round of Presidency will feel the pain of the people and satisfy their hunger for better standards of living.

As 2021 approaches, politicians will start buildings castles in the air (promises) but they must be warned that there are no more ‘illiterates’ in Gambian politics. Gambians have passed their exam in 2016 elections. An American statesman once said, “You can fool some of the people some of the time but you cannot fool all of the people all of the time.” Those EYES ON THE PRIZE for the Presidency will sweat for it in 2021. 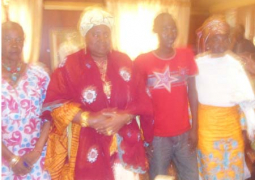