The case involving Musa Sanneh, an officer of Operation Bulldozer, was adjourned till 12 September 2012, before Magistrate Tabally of the Kanifing Magistrates’ Court, after it was mentioned on 29 August 2012.

Lawyer Moses Richards earlier stood up and told the court he was representing the accused person, and further stated that he wanted to familiarize himself with the case.

He applied to the court for the prosecution to make available all documents relating to the case to the defence.

It would be recalled that the accused, Musa Sanneh, was on 22 August 2012, arraigned at the Kanifing Magistrates’ Court and charged on three counts of abuse of office, corrupt practice and destroying evidence.

To prove their case, the prosecution called two witnesses,  Vesna Faye Milosavljevic and Omar Corr, who is a lieutenant at the Gambia Police Force.

Vesna Faye Milosavljevic told the court the accused, Musa Sanneh, gave her six stones of heroin on credit to the tune of D9,000 and later two grams of heroin valued at D3,700 on credit as well, adding that she paid D12,700 to the accused.

Omar Corr testified that when they conducted a search on the accused, they found D12,700 in his possession. 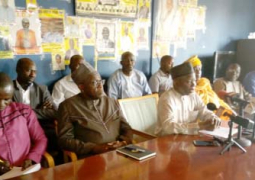