We congratulate you on your inauguration as President of the Republic of the Gambia following your election victory in the December 1st 2016 Presidential Elections.

As patriotic Gambians, we welcome your return to the shores of The Gambia to take up the mantle of leadership at a critical and challenging time. As a civil society initiative promoting Democracy and the Rule of Law, we wish to express our concerns over the appointment of Mrs Fatoumatta Jallow-Tambajang as Vice President in the face of doubts about her eligibility on the grounds that she is reportedly over the age of 65.

The Vice President nominee, in our view, has the requisite academic qualifications, skills, experience and aptitude to discharge her role professionally. However, it has come to our knowledge that there is confusion over her real age.

It is our duty as concerned citizens to bring to your attention any doubts raised about the age of Mrs Fatoumatta Jallow-Tambajang that may impinge on the propriety and constitutionality appointing her to the office of Vice President.

Your Excellency, at your recent press conference, you have expressed your belief that the appointment of Mrs Fatoumatta Jallow-Tambajang is compliant with our constitution and invited the public to proffer any evidence to the contrary.

With respect your Excellency, the responsibility and onus of ensuring the appointment of any Gambian to the office of Vice President rests on the state.

Civil Society as the Fifth Estate are the watchdogs of our democracy and in this capacity, deem it fit to raise the legitimate concerns of the population.

The state has all the resources and control over all the relevant institutions that have the information that can put the impending controversy to rest.

In the interest of safeguarding our nascent democracy, we urge Your Excellency to ensure that the appointment of the Vice President is fully compliant with the Constitution and any doubt about her age is resolved without an iota of ambiguity.

The on-going uncertainty and conflicting information about the Appointed Vice President’s age is encouraging a lot of speculation which in turn is undermining confidence in the new Government.

As you rightly said at your inauguration “to whom much is given, much is expected”. We expect nothing less than probity, accountability and respect for the rule of law.

With respect, Your Excellency, we trust you will take the right decision that will uphold the rule of law and respect for our democracy. 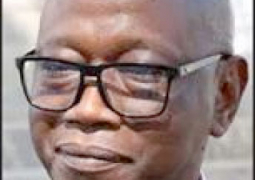