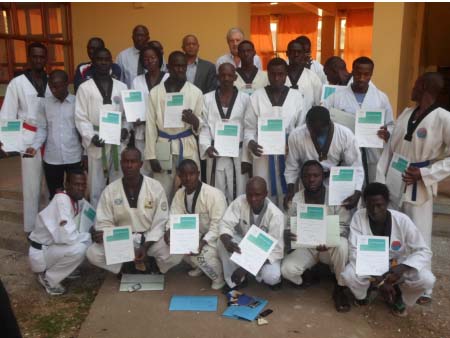 A two-week level one technical course for National league Taekwondo club coaches organised by the Gambia National Olympic Committee in collaboration with the Olympic Solidarity and the Gambia Taekwondo Association from19 to 30 December 2013 at the Independence Stadium Friendship Hostel in Bakau wrapped up on Tuesday.

Aly Noure Muhammed Taher from Egypt was nominated by the World Taekwondo Federation (WFT) to conduct the course.

Speaking at the closing ceremony, Momodou Demba, Gambia National Olympic Committee (GNOC) development officer, who chaired the occasion, recalled it was the second level one course organised for Taekwondo coaches.

He described the participants as dedicated and committed during the course, adding that the GNOC organised the course to ensure taekwondo is alive and kicking in the country.

He said his office cannot support the taekwondo association if they are not active, calling on them to be active and contribute to meaningful development.

He also said if the taekwondo association is active his office would help fund some of their activities, adding that at the GNOC they help to develop the capacity of associations.

Mr Demba called on taekwondo associations to come together, as well as organise programmes together, so the GNOC could also help them organise courses.

Alagie Fatty, secretary general of the Gambia Taekwondo Association, in his remarks, described 2013 as a difficult year for the association but said they hope, with the help of other associations and the GNOC, they would be able to move the central association to higher levels.

The association has developed compared to the past, he noted, saying the only way they can excel is by taekwondo black belt holder forming clubs in regions.

He also stated that the association was dormant for a while due to lack of support.

Mr Fatty challenged participants to make best use of their certificates by establishing taekwondo clubs in the country, saying the way forward for the development of taekwondo in the country is by all of them coming together.

He promised they would make best use of the knowledge gained from the course, saying it is high time they moved taekwondo forward.

He concluded by thanking the course instructor and the GNOC.

Aly Noure Muhammed Taher, Course Instructor, in his statement, thanked the GNOC, the participants and everyone who facilitated the course in one way or the other.

“I hope 2014 will be a new beginning for Gambian taekwondo,” he remarked, adding: “We hope to see you not only in continental competitions but also in global events.”

He said it was great for him being in the country again, adding that he had seen a lot of developments.

He stated further that there are numerous international programmes lined up but the Gambia Taekwondo Association needs to organise national championships to qualify for the events.

Peter Prom, secretary general of GNOC, who represented his president, thanked Mr Aly, saying his presence was once again appreciated.

The participants sacrificed a lot during the course, he noted, calling on them to continue the momentum.

Everybody needs to put hands on deck to develop the sport, he told the taekwondo association, while assuring its members of his office’s financial support as long as the association is organised.

Mr Prom also challenged the association to start encouraging and scouting more females to take up the sport.

“The more you organise yourselves, the more we support you,” he went on, while wishing everyone a happy New Year in advance.

The participants were each awarded with a certificate at the end of the course.

The course instructor was also presented with a certificate by the GNOC for his generosity and love for The Gambia.

Baba Sarr gave the vote of thanks. 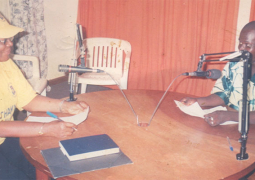