Nyassi came into the match in the 77th minute in place of Mastroeni marking his debut for the Rapids but his Gambian compatriot Mamadou Danso, who plays for the opponents, Portland Timbers, watched his side's defeat on the bench.

First-half goals from Jeff Larentowitcz, Omar Cummings and Pablo Mastroeni put the MLS Cup champions in control before Kenny Cooper pulled a goal back for the visitors 11 minutes from time, according to goal.com.

Almost a year and a half after a car accident in Northern Virginia severely injured Gambia-US star Charlie Davies, the match marked his MLS debut with two goals in 25 minutes as United beat the Columbus Crew 3-1.

The Vancouver Whitecaps were 4-2 winners against Amadou Sanyang's Toronto FC. Goals from Eric Hassli and Terry Dunfield - either side of Dwayne De Rosario's equaliser - gave the Whitecaps a half-time lead and further efforts from Atiba Harris and Hassli again made the result safe before Maicon Correa pulled one back for Toronto.

In the season opener for Omar Jasseh’s San Jose Earthquakes and Real Salt Lake, both teams have created their fair share of chances, but it was the Real Salt Lake captain Kyle Beckerman who was the lone scorer of the game, netting a second-half tally for a 1-0 win. 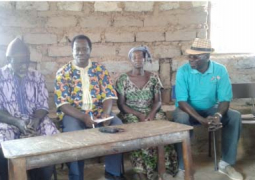