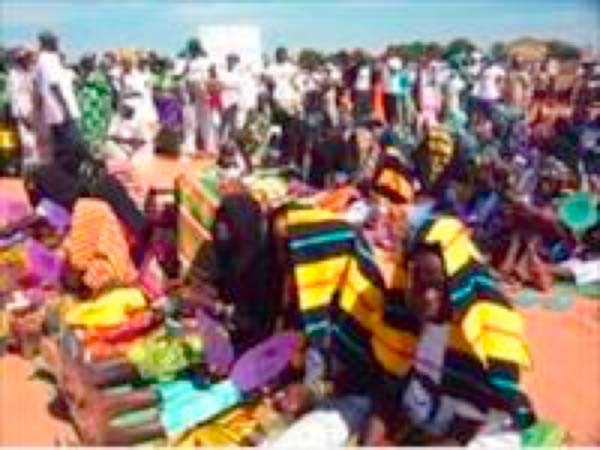 It was early morning after men are returning from the mosque for Fajr prayers, and the morning was very cold as usual.

Lying on my bed alone I tried to wrap myself up in a blanket to drive away the cold. The environment was quiet and peaceful. Then, suddenly, I heard footsteps and the child, my sister’s daughter that I was sleeping with on the same bed, being smuggled away by an old woman.

I woke up and followed the woman to see where she was taking her to.

As I reached the sitting room, I saw five children all girls between the ages of 8 and 10 seated on the laps of their mothers, waiting to be taken away to the “Ngansingbaa” (circumciser) to cut them, mutilate or sealed them up.

The children were each handed with sweets, biscuits and pampered like those that are celebrating their birthdays.

I began to ask their mothers, where they were taking their children to.

“Are you blind or you are asking for the sake of asking. Because you know that the “Ngansingbaa”, Amie Jallow, is around. We are taking the children to her for them to be circumcised. Because they are all “Solimas” (uncircumcised), the mother of one of the children responded.

“These are children, they are babies, and they do not even know where you are taking them to.

“Look at them; you disturbed their sleep this early and peaceful morning, and as well lied to them that you are taking them somewhere; that they are going to be given heaven and earth.

“You pampered them with lots of gifts. Yet you break your promises; you break their heart and cut them, mutilate and sealed them against their will.”

I said this to the mothers, but they hissed at me, put their children in a car and took them to the “Ngansinbaa” Amie Jallow in Lamin Village. I call her the Gambia’s Queen Cutter.

I remembered 25 years ago, when I was the same age as this children. One evening I saw my grandmothers, three of them with their bags came to my home in the name of a holiday.

My grandmother was also my namesake, and seeing her in my house brought nothing but joy to me and the rest of the children.

Then one early morning, we welcomed a woman. She is not a very old woman, but this woman looked like a very important person to them, because she was greeted and welcomed with much respect by everyone in the house.

Her name was Sona, a famous “Ngansingbaa” cutter living in Dippa Kunda.

My grandmother woke us up early in the morning, and we were more than ten in number. I was the youngest, and we were adorned with so much beautiful beads and traditional wrappers.

My grandmother held me up on her shoulder and paraded me in front of everyone in our compound, as if I was a trophy won through a game.

Finally, she took me behind the toilet and gave me to Sona, the “Ngansinbaa” (cutter). When she held out the razor blade, I struggled to go free, my grandmother and two other women held me tight on the ground.

My legs were spread widely open and this woman without shaking a bit, or being emotional as to the fact that I was a child, and she a mother, cut me. I could feel the “razor blade” clearing my clitoris, and all I could see was blood oozing out of me.

After many years, the name “Sona”, the circumciser who cut me was still stuck in my heart. I have been searching for her for a very long time. I wanted to meet her so badly. I have made enquiries and I was told she is still alive.

Those hands that held the blade that cut me look unshakable and intact. I greeted her, and introduced myself as one of the girls she cut.

She could not recognize me, but then that was no surprise because she had cut so many girls, thousands of girls, just like me.

“I inherited the Knife from my mother-in-law when I was just newly married into the family. When she is going out to cut, she will go along with me and I will hold the girls and she will do the cutting, while I watched. When she died, I continued the practice and it feels good. As far as I am concerned I will hold on to this knife till I die, just like my mother-in-law did,” she told me.

That very day, she was preparing to go to a village to cut more than 100 girls. But then before she could leave for that village something happened, that did not only shock my cutter but the entire country and that save those girls she was about to cut.

President Yahya Jammeh was on TV that very night to denounce Female Genital Mutilation in The Gambia, banning it with immediate effect.

Meeting my cutter for the second time after the ban was not a pleasant and welcoming meeting.

The pronouncement made her ill. It broke her down, and she could not look at me in the eye and repeat what she said to me before.

Instead she said, “The President has spoken and who are we to challenge him; so if he says we stopped, then we stop and I stop cutting girls from now on.”

Like many others, I considered it as a victory but I’m not convinced because dropping the knife for them is equal to traditional suicide.

I can feel the anger in the land of cutters, because to them the pronouncement by the President was nothing but an insult to their age-old tradition.

Then I headed to The Gambia’s Queen Cutter, Amie Jallow’s house. This woman hugely built and tall with a gentle and humble nature is The Gambia’s fierce cutter.

Gambian women worshipped the ground she walks on. She is three in one. She is a cutter, a marabout and a spiritual guard for traditional ceremonies including FGM. She is the only cutter that tours the country year round to cut girls.

Few months ago, she told me “You think we will waste our time for many decades on an unworthy cause. This is a worthy and noble cause, and nothing can stop us from doing it. We will cut, and when we are tired we will pass it on to the next generation.”

So I decided to knock on her door again when the pronouncement was made, but I was wrong when I said she tours only The Gambia to cut girls.

Amie Jallow tours both Gambia and Senegal, and that is where she was when the pronouncement banning FGM by the President was made; so I could not get her to speak to me

My best friend Awa got married last year. She was sealed after being cut, which means she had just a tiny hole left to urinate and menstruate.

This is quiet common in The Gambia. Survivors are not told this will cause problems when they marry, so her wedding night was a shock.

“My name is Awa Ceesay, and I was cut when I was a child; but it never occurred to me that I was sealed until my wedding night. I was told that I have to be open up again, for my husband to be able to have sexual intercourse with me. I was left with a tiny hole, so tiny that sometimes even menstruation becomes a problem for me. I was then taken to see an old woman in my neighbourhood to unseal me.

This was the worst experience of my life; having to go through the blade for a second time was shocking. I had to face this woman, look into her eyes and let her use the blade on me just like that. I cried out aloud, but this was what they wanted me to do, so I had to do it.

These women, so wicked, did not allow me, or the raw wound to heal; but to add salt to injury they forced me to have sex with my husband at that spot. The experience was like being cut up between death and life.

Two months later, after my marriage, I got pregnant; but then after going through scanning they told me my baby was not breathing, so they abort it.

I keep on going through the same process anytime I got pregnant, and then I was told by doctors to now sit for one year before getting pregnant; even though I so longed to hold my own baby in my arms, just a child that I could call mine. This is what FGM brought upon me.

Indeed in the land of cutters, FGM denied many a child, others a husband while reducing some to non-human status as no one wants to associate with them. It gave such people fistula - urine and stool leaking out of them at the same time.

At the time when only one blade was used to cut thousands of girls, Sibo lost her only child to HIV through FGM.

My name is Sibo. I struggled for ten years just to get a child; just one child will solve the hardship; I am enduring in that family for not being able to conceive.

Suddenly, Allah answered my prayer and blessed me with a daughter. I named her after my mother, Nyima. Her coming into my life consoled my lonely soul, and reduced the amount of insult I endured in that household. My baby girl was just nine months old, when she was taken away to be cut.

One early morning, just at the start of the cutting season, my co-wives entered forcefully into my house and took away my baby girl who was still sleeping.

I ran after them, and I was held back at the entrance. I stood there helpless with no one to help me and my baby. I can hear my baby girl crying, but these women wouldn’t stop torturing my baby.

After many years, my baby girl, my only child, got sick frequently; until that faithful day when the doctors told me my baby is HIV-positive.

It was as if the world was coming to an end; in fact, my world collapsed that very day. My joy was gone; my right arm was broken, and once again I became the gossip of society. New names have been added to my name such as a “prostitute”.

FGM took the only thing I cherished so much in this life away from me. Banning it alone will not bring back my lost child to me, but prosecuting the circumcisers will console me a bit.

In The Gambia, the land of cutters, going through the blade as a girl child was a right, not a privilege and one must obey in order to fit into the society.

Now the cries of survivors have been heard, the President denounced the practice, the anti FGM Bill passed and violators faced a 3-year jail term or D50,000 fine.